Story of a Landscape: Expanding Paradise at Whidbey Island

A large acreage property on an Island near Washington presented a unique set of transportation challenges.

Two years ago, Deby Kohlwes was called out to Whidbey Island in Washington by a former client who wanted to talk about irrigation. By the time she was finished, the job had grown to almost $120,000 of hardscape and plantings that earned a 2015 award of merit from the Washington Association of Landscape Professionals.

Her biggest regret: the family had to move before she could complete a second phase of the project. 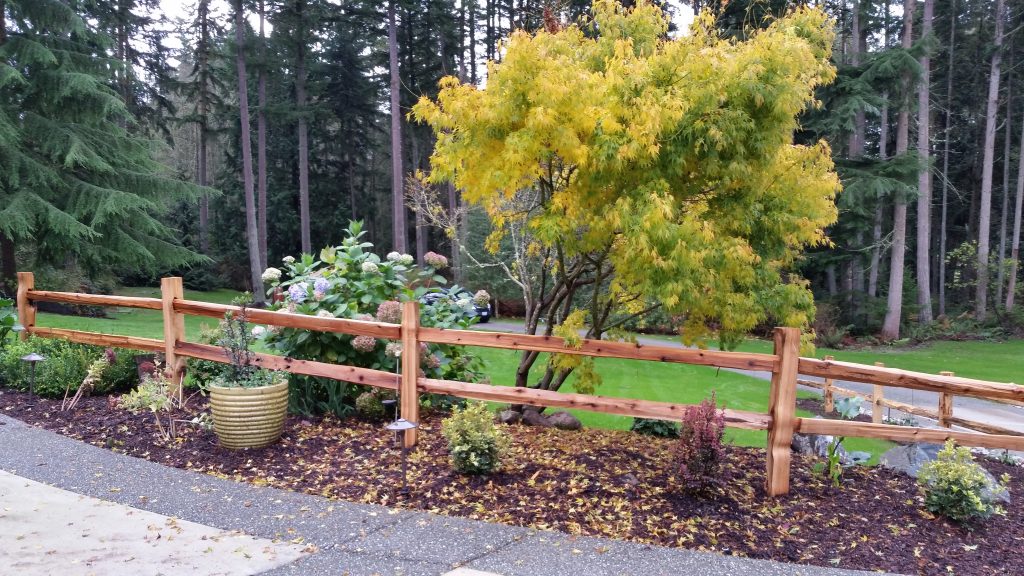 Kohlwes and her husband, Greg, are co-owners of The Grounds Professionals, with Deby handling the design portion of the design/build company. When the clients, the Guempel family, first contacted her, she says they were frustrated with parts of their 5-acre lot.

“They were having problems with a disease that’s taking a lot of the Douglas firs,” she explains. “They’d had to take out a whole lot of trees, which had opened up a new area where they wanted grass. But, they wanted to make sure they had irrigation.”

Deby told them she could design just an irrigation system, but if they were interested she’d be happy to show them how they might improve the whole outdoor living area, including how it might be done in stages.

“They said they wanted the design, so when I came back with the bid they’d wanted on the irrigation, I had a design for the outdoor living space,” she says. “It included a large patio, a fire pit, a water feature and a wall for informal seating, as well as outdoor lighting. They had two teenaged boys and they really wanted to do the project while they were still home and able to enjoy it, so that’s how we got into it.”

The property already had some existing structures, including an arbor, some split rail fencing and a wooden deck with a hot tub. 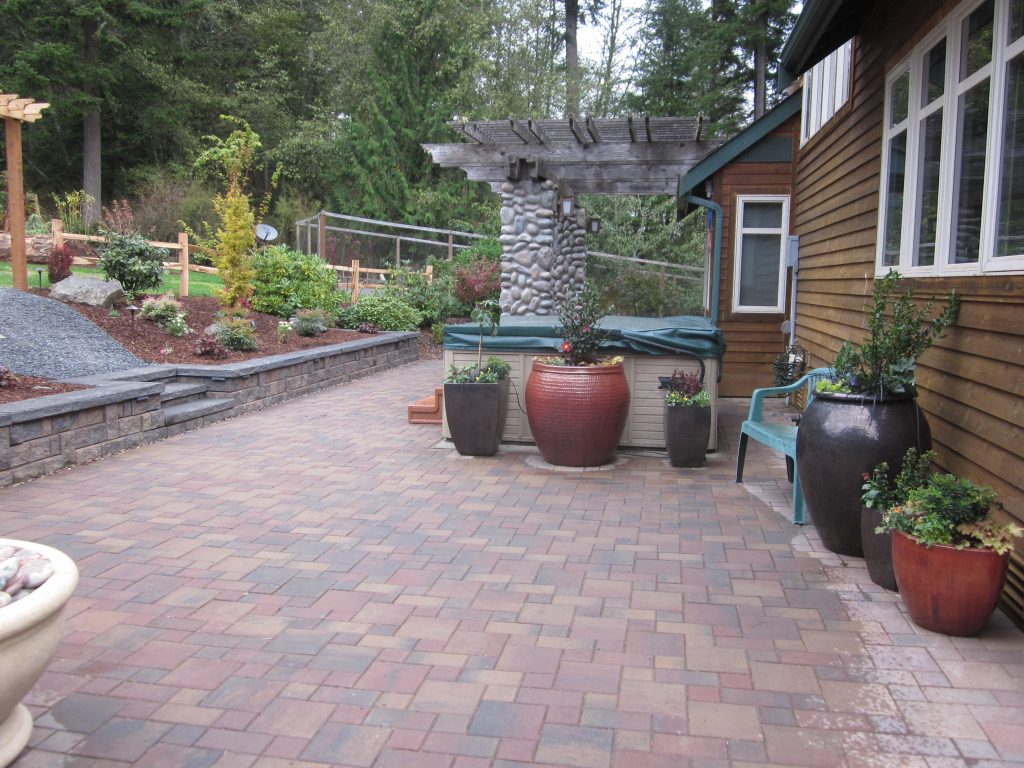 “We tried to balance out the design between natural and functional,” Deby says. “For instance, the old split rail fences were replaced with new split rail fences. The original arbor was rebuilt and another added so it draws your eye through the project.”

The patio, which is approximately 1,000 square feet and visible from the kitchen and great room, was constructed of Abbotsford Concrete Products’ classic standard series pavers in its Indian Summer blend. They were sand set to help handle drainage issues.

“They were done in an ashlar pattern with three different sizes so it appears more random and less formal,” Deby says.

She also turned to Abbotsford Concrete for the material for the seating wall, which measures approximately 100 linear feet and serves two purposes.

“There was an elevation change to the back upper yard, and we wanted to push back before the hill just sluffed down into the back of the house,” she says. “We also wanted to create informal seating for when the teenagers were over; walls are awesome for that.”

“My dad is a retired engineer, and he and I played with some ideas that would still allow us to place the jumbo units vertical for interesting staggered depth but that would work with smaller walls without having to do a zillion cuts,” Deby explains. “It was done that way to make it appear more natural.” 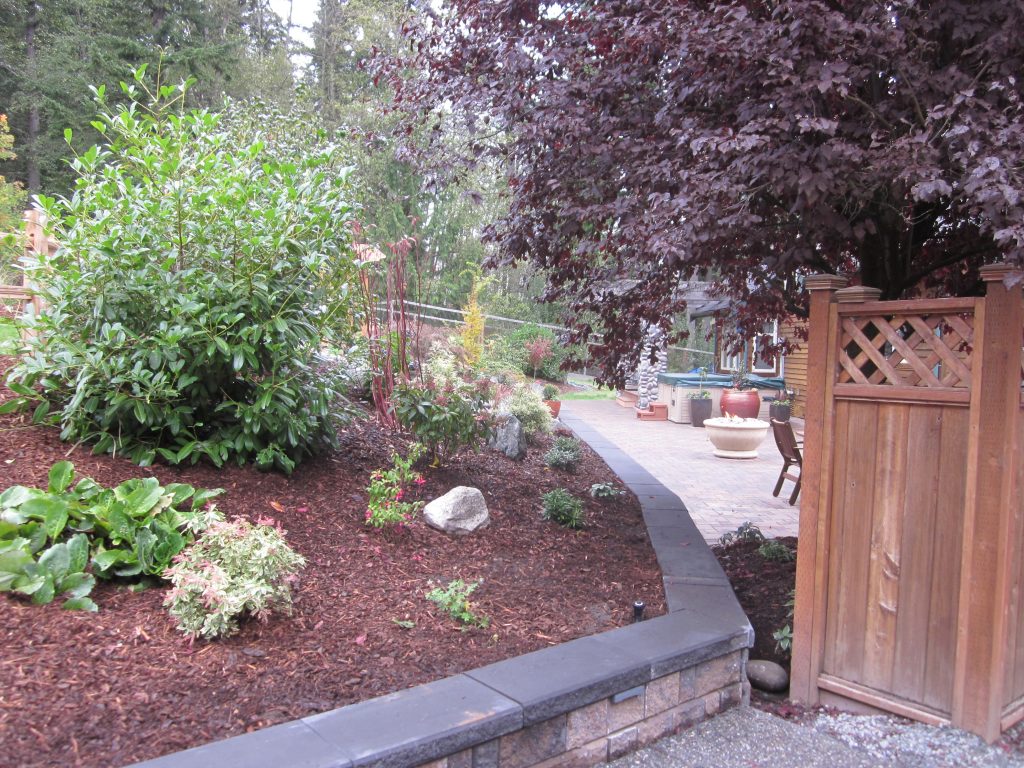 To further improve drainage off the patio, Deby opted to use a decorative strip of pea gravel next to the wall that was then treated with Klingstone Path’s liquid-applied polymer bunker barrier.

“It causes the pea gravel to go hard, but it’s still water permeable, and stays completely firm,” she says. “It also brings out the color and makes it shiny. We used it to tie in with the water feature and the river rocks in the fire pit.”

Deby adds that plans were create a pathway to the upper yard using pea gravel and the Klingstone product as part of the second (undone) phase of the project.

Although The Grounds Professionals often do custom fire pits, for this project, Deby says the client had seen a 52-inch fire bowl from Eldorado Stone that was then finished in river rock.

“They’re not on natural gas out there, but they did have propane on-site,” she says. “We worked with the propane company to install lines so it was ready for a fire pit, and we looked at a lot of different designs before the wife fell in love with the one we used.” 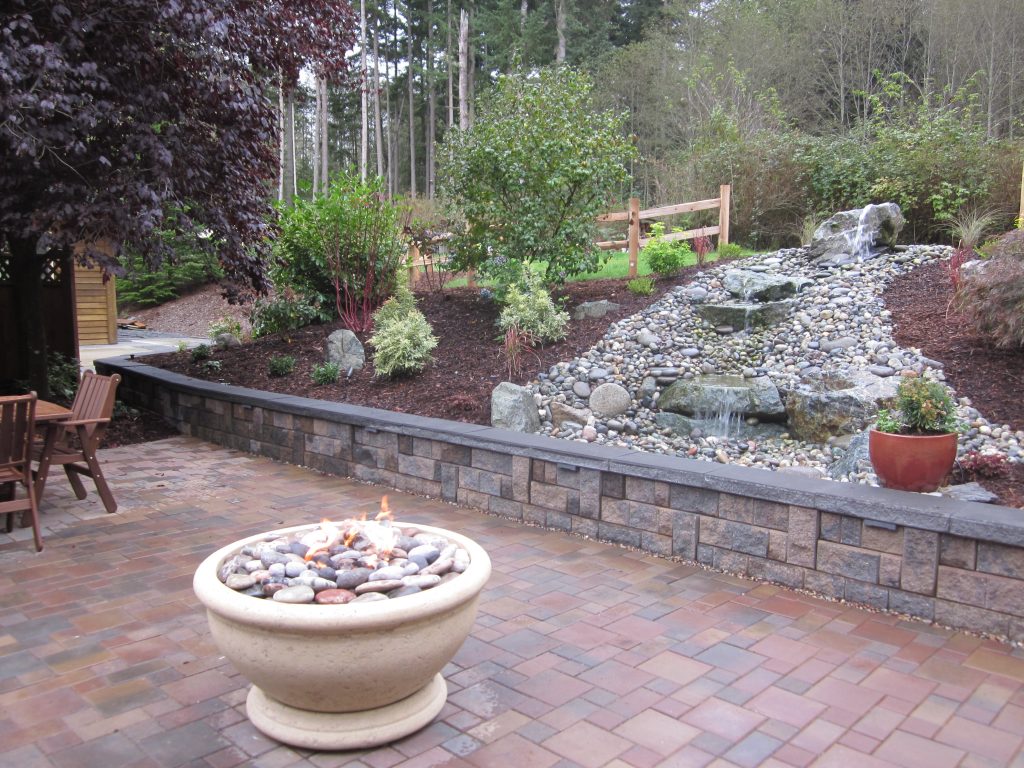 “We wanted a lot of water flow off the top,” she says. “And, we wanted it to be able to be seen from behind because there’s a wood-burning fire pit further back in the acreage.”

The Kohlweses put a great deal of care into selecting the rock for the water feature. The top stone features an original dynamite hole in it, and from there they incorporated several different rocks to create the drops into the final basin.

“There’s a lot more water flow off that than probably anything we have done before, so it was a lot of fun,” says Deby.

For the planting of the project, Deby says she strove for a natural look that in large part mirrored existing trees and plantings on the entrance driveway.

“Well, they had a motorhome that was the first thing you’d see when you came up the driveway, and we did plant a bit of a laurel hedge to hide it on the one side,” she says. “Even though there aren’t saltwater exposures, the wind is pretty significant, so we had to be aware of certain things, along with deer and rabbits.” 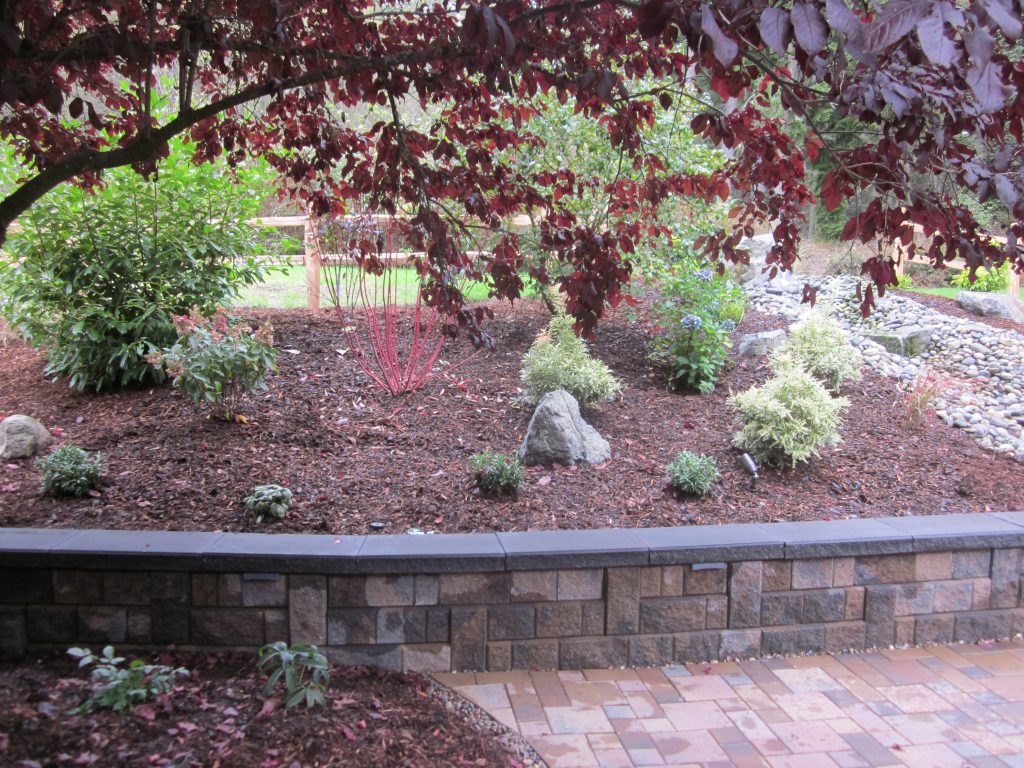 The client’s preference was for hydrangeas, and Deby installed container plantings along the edges of the arbor and the side of the house, as well as to block the hot tub area. Other choices were maples and red-twig and yellow-twig dogwood.

“We put the dogwood in different spots because they’re such a great native plant and give such great interest and color in the winter,” she explains.

Simply getting the water for the water feature and for the irrigation system – which includes almost 30 zones – was one of several challenges the project offered, since the property is on a well.

“The whole 5 acres isn’t irrigated, but the well is located near the entrance of the property,” Deby explains. “We barely had enough to get water to the furthest upper grass area, but it works. It’s difficult when you want to move that much water.”

Another was the location of the job. Whidbey Island is a 20-minute ferry ride from Mukilteo, Washington, presenting challenges for both manpower and materials. In some cases, The Grounds Professionals needed to find new suppliers on the island. In others, it meant planning ahead to make sure equipment was on the site as needed.

“With the crews, we tried to make it more fun for them,” says Deby. “We had a location over there where they could stay once in a while. If we were trying to meet a certain timeline, we would offer that. We also gave food allowances.” 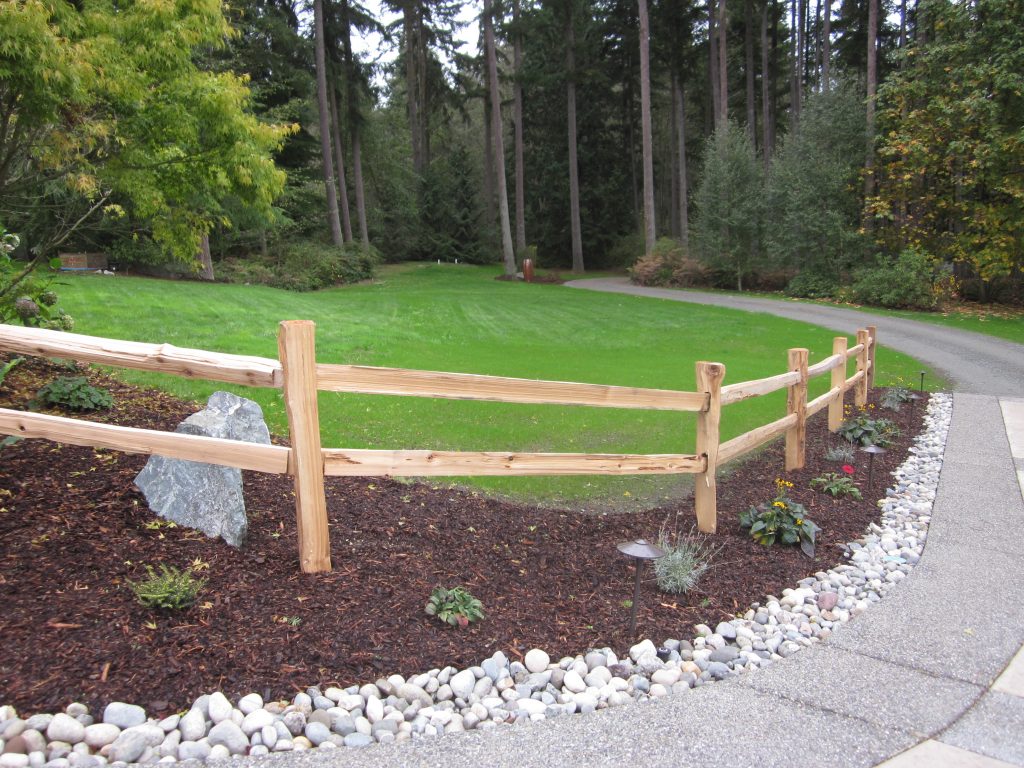 And, because of the scope of the job, a large amount of material came onto the property. For instance, an area where trees had been removed had to be backfilled with almost 420 yards of fill.

As much as the project pushed the company – and it took one of its two crews almost three months to complete – Deby says the rewards were great, and went beyond the WAPL recognition. For her, its greatest success was simply how it improved the family’s living space.

“From the time we got done until they moved, they said that they used it every day,” she says. “They just loved it. The real success was creating an area that they really wanted.” 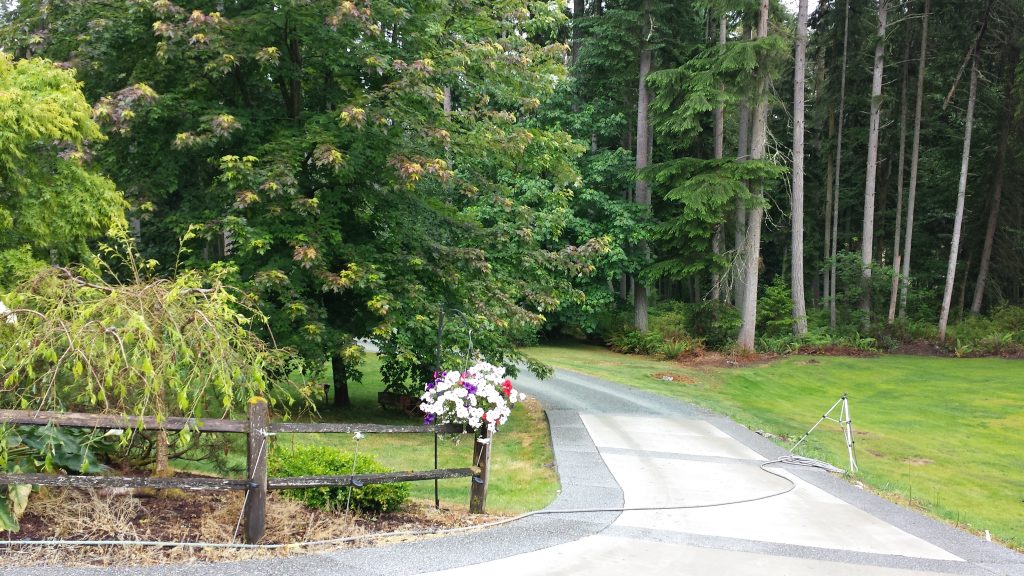 However, it offered other rewards, as well. Deby says in Mukilteo, most people have small lots, so dealing with such a large property was a welcome change of pace.

“Since we’ve done this project, we’ve done several other projects on Whidbey Island, even though it’s not an area we advertise to,” she concludes. “There’s been nothing with this much acreage, but we’ve done some really interesting things, and it’s fun to do something different.”