Get Rid of Crabgrass

Keep this weed out of ornamental beds.

It’s no secret to anyone who maintains lawns that controlling crabgrass can be a constant battle. The good news is that there are many resources available to help provide guidance for keeping turfgrass free from crabgrass. Unfortunately, how to wage war against crabgrass in landscape and ornamental beds is given much less attention.

Dr. Mark Czarnota, associate professor with the University of Georgia’s horticulture department, says, “There are always new products being developed, but the ornamental market is nothing like the turf market as far as new products coming out,” says Czarnota.

Czarnota recommends cultural practices as the first line of defense. “In ornamentals, first we try to limit chemical use—just putting out the least active ingredient we can. The herbicides are mostly there if things get out of control. We recommend that people maintain at least 2 to 4 inches of organic mulch—shredded hardwood, pine straw, anything like that. And, that’s 2 to 4 inches after it’s settled. If that’s applied once or twice per year, that’s going to control probably 80 percent of weed problems in ornamentals,” he explains. “If the mulch layer decomposes too much, it just becomes a seedbed and you get a lot of annual weed problems. That’s when you might consider using a preemergent herbicide to get yourself back to a manageable level.”

If that’s the case, there are several options to choose from. “The DNA-type products [dinitroanaline] have been pretty much the backbone for weed control in landscape settings,” says Czarnota. “You can buy those as sprays [with water as a carrier] or as a granular. In the South, we use oryzalin, which is sold under the trade name Surflan, as well as several other product combinations. And, pendimethalin, sold under the trade name Pendulum [BASF], and a whole number of other combination granular products [are available].”

Czarnota advises that if you’re trying to treat both the lawn and the landscape with one product, “I’d probably go with prodiamine, sold under the trade name Barricade [Syngenta],” he says.

The granular combinations products on the market generally are mixed to provide a wider spectrum of control, explains Czarnota. “The DNAs are there primarily for grass control, but they do control a lot of other broadleaf weeds.”

Dow’s dithiopyr offering, Dimension, is another product that has some ornamental landscape uses. “We got that back in the early 1990s, and it opened up a brand-new window for applications,” says Czarnota. “Unlike the DNA products, which are preemergents and won’t control the annual grasses after they have emerged. It allowed us to control crabgrass up to about three tillers [side shoots].”

Beyond that, there are limited postemergent herbicide options in the ornamental market, says Czarnota.

Given the value of ornamentals, it pays for landscapers to proceed carefully when treating landscape beds. “The biggest problem I see is when guys have a little leftover postemergent herbicide that contains 2-4D in the tank and they’ll accidentally apply it to ornamental beds,” Czarnota says. “The dicamba component can cause a lot of injury to ornamentals. It’s usually a sublethal dose that doesn’t kill the plant, but it takes a long time for the injury to grow out. Most people don’t want to wait, they want their ornamentals replaced, so it ends up in litigation,” he explains.

While most turfgrass herbicides are applied as a spray, Czarnota says that’s often not the best approach when it comes to ornamentals. “When you use herbicide in a granular formulation, at least when it’s dry, you eliminate a lot of the foliar contact, and that can prevent a lot of injuries,” he explains. If there’s an overhead irrigation system, it’s a good idea to run that after an application to wash the herbicide off the leaves and also activate the preemergent product. He adds, “That moves the product into the top .25 inch of the soil, where a lot of the seed germination happens.”

With any herbicide treatment in ornamentals, Czarnota says it’s important to follow the common label instructions to “test on a small area before applying to all ornamentals.” Timing is also critical with preemergent herbicides. “The old adage is when the forsythias start blooming, then you put your crabgrass control out,” he says, adding that your exact location and weather zone need to be taken into account for precise timing.

Dean Mosdell, technical field manager with Syngenta Professional Products, agrees that herbicides are not always the first option in controlling crabgrass in ornamental beds. “Unlike in turfgrass, you have the option to use mulch in landscape beds as a means of reducing weed pressure. And, there’s also a labor option: hand-weeding is obviously much more common than you would see in turfgrass,” Mosdell explains. “Because you can see the crabgrass more easily in the beds, you can hand-weed or use a nonselective postemergent to control it prior to applying the preemergent. In the turfgrass it’s tough to see the crabgrass when it’s small, so you have a little more flexibility in landscape beds.”

While many of the same herbicides are available for use in turfgrass and ornamental beds, the very nature of ornamental beds makes selecting the right product, and using it at the right time, more of a challenge. “The difference is that instead of working in one species of turfgrass you’re dealing with multiple species of ornamental plants. You might have not only perennial woody species, but also herbaceous perennials and annuals, which makes timing a little more difficult in landscape beds,” says Mosdell. “Most woody species are pretty tolerant; you can put the product all around. Barricade’s label, for example, includes many woody species and even perennials listed, but when you get into annual bedding plants, it’s a little more difficult to time when applications are made, and there are fewer annuals listed on the labels.”

Whenever preemergents are applied over the top of ornamentals, including those listed on the label, it’s important to irrigate to wash it off the foliage, Mosdell stresses. That’s usually not quite as critical in turfgrass, where a rain event is likely to occur within the typical 14-day window required to activate the product. “But, even for ornamentals that are tolerant, it’s better to wash the preemergents off the foliage as soon as possible,” he states.

Most spray applications in landscape beds are made with a backpack sprayer or small dedicated spray tank. Whatever tool is used, “the irregular shape of most landscape beds can make it more difficult to calibrate and get the right rate per unit area,” says Mosdell. “You want to make sure you’re not putting down too much or too little.”

Getting the preemergent application right as far as timing and rate is particularly important to help get an ornamental bed that’s been overrun by weeds—for example, by neglect—back under control. “Usually, if a bed hasn’t been maintained properly, you would first hand-weed to clean up the beds and then apply both herbicide and mulch,” says Mosdell. He explains that most grass preemergent herbicides can be applied first, and then immediately covered by mulch with no waiting period required. The length of control of crabgrass then depends on the type of preemergent used.

Perhaps Mosdell’s most important advice when it comes to controlling crabgrass in ornamental beds is to first properly identify the weed. “Even within grasses, it can be challenging for landscapers. Dallisgrass, for example, can look a lot like crabgrass. You can try to manually remove Dallisgrass, and since it’s a perennial it can regrow if there are any underground parts of the plant remaining. And, it won’t be controlled by a preemergent, because it’s not an annual and doesn’t regrow from seed. Identification of the weeds is an important step.”

Patrick White is a freelance writer and editor who has covered every aspect of the green industry in the past 15 years. He is based in Middlesex, Vt., and can be reached at [email protected] 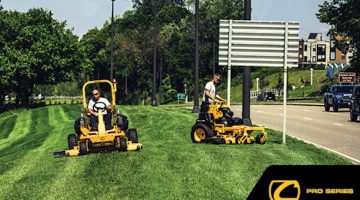