5 Favorite Xeric Plants For Many Regions

The palette of plants that can tolerate challenging dry conditions is growing, extending their usefulness from xeric regions to friendlier climes. Our friends at American Nurseryman asked noted plantsman Nicholas Staddon to recommend a few of his favorite selections. These woody and perennial plants that are rugged enough to withstand reduced supplemental water — and are able to provide pleasing forms and delightful colors. 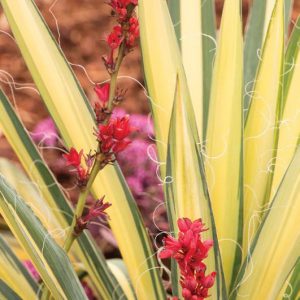 “My first selection is a Hesperaloe parviflora, the red yucca,” Staddon says. “There’s a variety which has been on the market for a couple of years, actually probably about four years, called Brakelights (Hesperaloe parviflora ‘Perpa’ Brakelights® PP# 21729). It’s the result of a breeding program run by Ron Gass, who owns Mountain States Wholesale Nursery, and it is, without a doubt, one of the most floriferous Hesperaloes on the market.”

The species is native to Texas and northern Mexico, so it’s tough as nails and thrives in full sun and reflected heat to Zone 5.

“Brakelights® is a smaller, more compact grower” than the species, Staddon describes. “Hesperaloes over a period of time can get very big and very rambunctious.” This slow-growing selection, however, forms a 2-foot clump of very narrow, blue-green leaves, from which spring extended flower stalks sporting brilliant blooms. “This is the reddest of all the hesperaloes,” Staddon claims. “And she sets little or no seed, so because of that, she has an extended flowering season. She will rebloom on the same stem, which is very unusual. Depending on where you are, the blooming season might change a little bit, but in my garden [in southern California], I’ve had a Brakelights that started blooming in September and the flower is just coming to its end now [early June].” 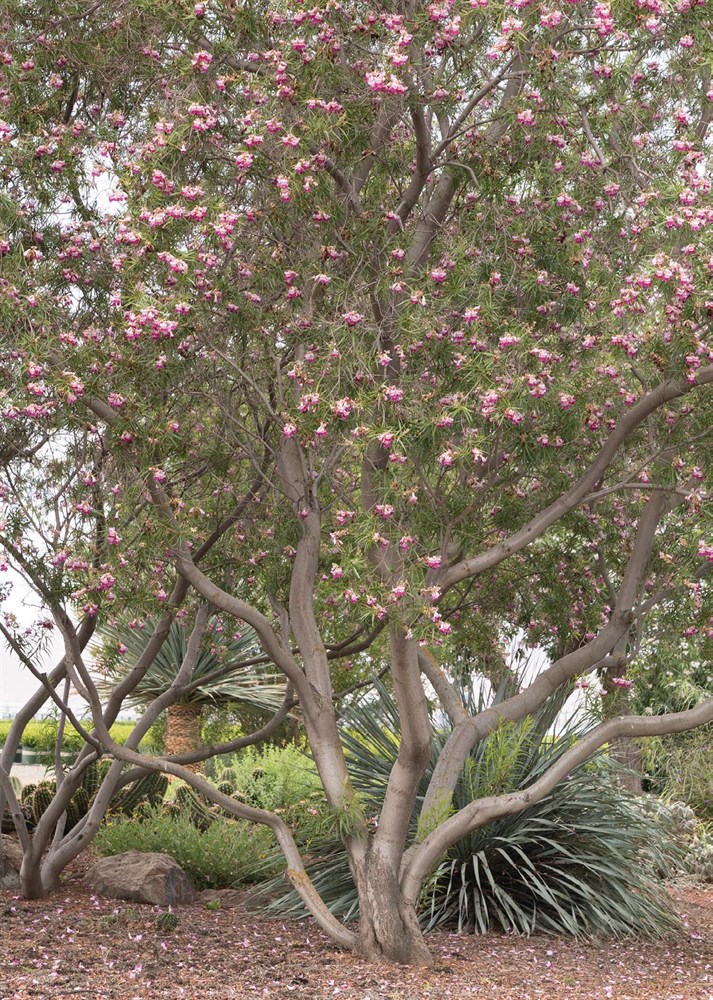 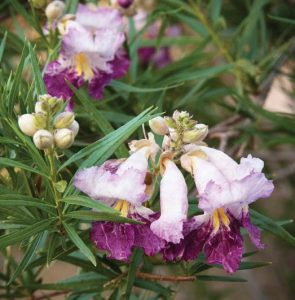 “This is a smaller tree or large shrub, the desert willow. It’s a plant that is really gaining in popularity, and breeders are doing more work with it,” Staddon claims.

“It’s very versatile; it makes a wonderful single plant in a small garden, and it’s been used along freeways,” he adds. “Chilopsis has been a real foundation of many gardens and landscapes in the Southwest for many years, but more and more people are starting to discover this plant. There are lots of varieties out there; you’ve got the seedling selections, which can go from kind of whitish to soft pink to soft purple. There are other great varieties on the market: There’s one called Warren Jones™, which has more of a soft pink flower with a yellow throat. There’s a pure white called ‘White Storm’, which has wonderful pink buds and then a pure white flower. Timeless Beauty® is one of the better seedless varieties on the market.

“They can get quite large, and they tend to be more multistemmed. They are deciduous, but they provide a profuse season of flowering; great for the pollinators as well,” Staddon concludes.

In general, desert willow is fast growing and can reach to 25 feet tall and wide at maturity in full or part sun. It’s hardy to Zone 6.

Deer grass — Muhlenbergia capillaris — is becoming more and more popular out West, according to Staddon. “Muhlenbergias are almost a household name in the Southwest,” he states. “Probably one of the best known varieties is Regal Mist®; once again it’s a seedling selection from Mountain States. Rarely do you ever see just one of these. They’re planted en masse, and in mid- to late summer they have this marvelous seed set, where the tops of the plants will get covered with these great purple flowers. And if you plant them where you get an afternoon breeze coming through, the seed heads will actually move with the wind. That alone makes you feel cool.” 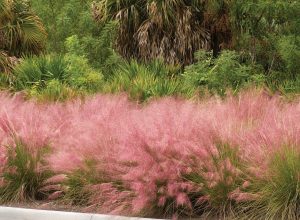 Staddon says that Regal Mist has “by far the most visual display; real nice pink flowers at the end of the season. She’s evergreen, so she’s going to show in the spring and all year around.

“I think one of the things that people love about them so much is whether they have flowers on them or not, they still look absolutely just fantastic,” he adds.

Regal Mist® reaches about 3 feet tall and wide and has a fast growth rate. It thrives in full sun and locations with reflected heat in Zone 6. According to Mountain States, reseeding has not been an issue.

Italian cypress (Cupressus sempervirens) is “a plant that has ruled the roost in the Southwest for many years — really, up and down the West Coast,” Staddon says. “It’s just synonymous with that Mediterranean climate out here. It’s used as a wind break, it’s used as an accent plant, it’s used as a container plant.” 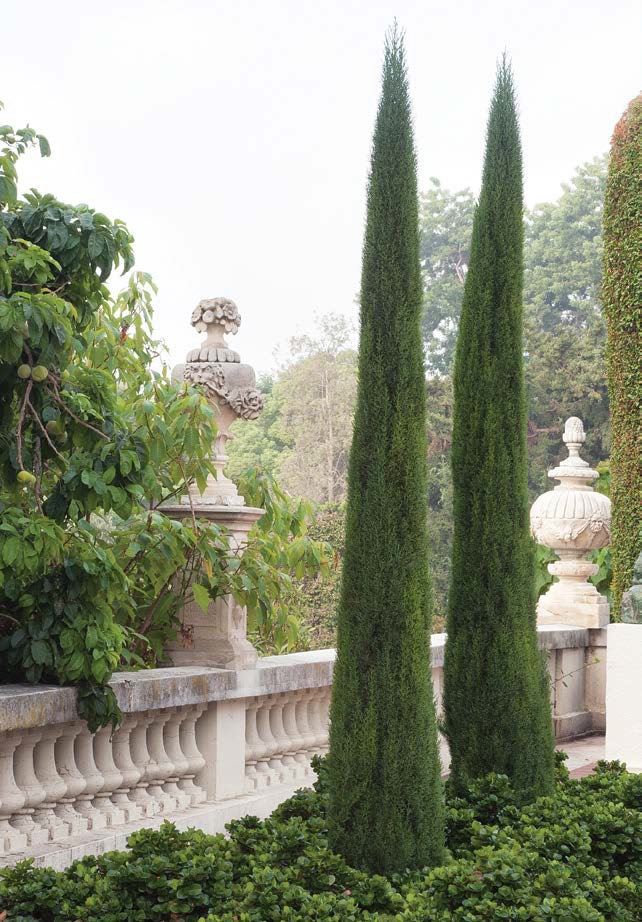 The species is slow growing and can reach up to 100 feet or so, but there are two cultivars that Staddon deems worthy of mention:

“One is a Monrovia introduction called Tiny Tower®, and Tiny Tower has probably been out there for 15, 16 years,” he states. “It’s used extensively by homeowners and also by the design community. It’s a much smaller growing flavor of the species — it probably will top out at about 30 to 35 feet [by 3 feet wide], and it maintains a really nice, upright, narrow habit. It tends to do better in the warmer, drier climates, so in the Southeast, even though it might be warm down there, they might get some spider mites.”

Tiny Tower® is said to maintain its narrow, columnar form without pruning, making it an excellent choice for formal plantings or as a container specimen in zones 7 to 10.

“The other variety is called Swane’s Golden,” Staddon says. “Swane’s Golden was created by Mrs. Swane, who was a nursery owner and breeder in New Zealand, and it has been around for absolutely donkey’s years. Again, it’s a smaller grower, very nice upright, compact habit and has a wonderful gold cast to it; it is by far one of the most popular golds of the Italian cypress.

“These plants could be used as hedgerows, they could be used as accent plants in the landscape, and they’re just wonderful for container plants as well,” he adds. “Some people will even shear them into topiary. Because they’re so tight and compact, they make a great spiral. I’ve never seen a plant bigger than 8 to 20 feet high. This is a really interesting plant, because it goes in cycles of fashion; it’ll be fashionable for seven or eight years, and then it’s not fashionable, and then everybody wants it again.”

Swane’s Golden is hardy in zones 7 to 9.

These C. sempervirens selections are very narrow and very columnar. “Both of these varieties are marked improvements; they do maintain a more columnar, upright growth habit. The traditional Italian cypress can get branches that can get large and the plant can open out. But these are good, narrow upright plants,” Staddon explains.

Read More from American Nurseryman: The Basics of Xeric Landscaping

The distinctive bottlebrush plant is one that’s not to be missed. 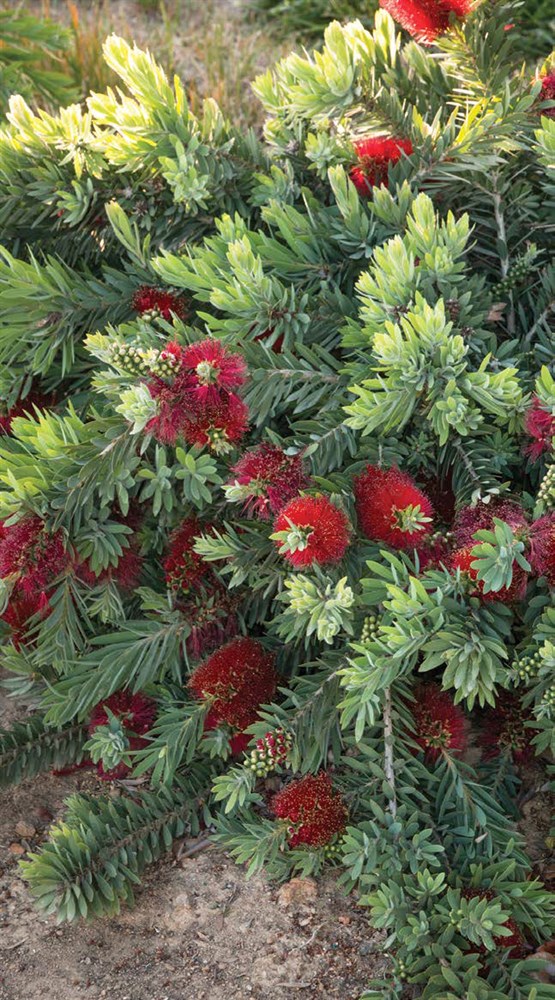 “A plant that really is in vogue in the Southwest and Texas is Callistemon (bottlebrush); they’re very, very popular,” Staddon says. “There’s a new one on the market that’s been out a year or so, which is called Slim™ (Callistemon viminalis ‘CV01’). Slim is a really upright, columnar plant. It comes from a breeding program in Australia called Tuffy Plants, and it’s readily available on the market here. It’s such a unique plant; so different from every other callistemon that’s out there.”

Slim is a prolific bloomer, and in spring to summer — nearly year-round in mild climates — it’s “festooned with flowers, absolutely covered with flowers,” Staddon describes. “Callistemon has these wonderful, bright red flowers that are really favored by pollinators.”

Slim reaches about 8 to 10 feet tall by 3 to 4 feet wide, much narrower than other selections, making it suitable for a variety of uses. “Its primary application is for a hedge, or a triangle of three in the garden to make an architectural statement. I think this plant is going to be an absolute winner,” Staddon claims.

Another favorite of Staddon’s is Little John (Callistemon citrinus ‘Little John’), which has been around for years and “continues to be planted in pretty much every landscape,” he says. “Gardeners use the plant extensively in their own gardens; great for a hedge; great for a triangle of three. It’s an early season, but long season bloomer, it has these wonderful, bright red flowers that are really favored by pollinators. Little John is really fun, because the foliage has a blue cast to it, so you’ve got a bluish-greenish foliage against the red flowers.”

Both bottlebrush choices are hardy in zones 8 to 11.

Editor’s Note: This article originally appeared on AmeriNursery.com. Nicholas Staddon, known as “The Plantsman,” is a consultant and strategic marketing partner for Village Nurseries Wholesale. Staddon previously served as the director of new plants and national spokesperson for Monrovia Growers for over 25 years.