Twenty years have passed since the 9/11 attacks, yet there’s a feeling of permanence in a hemlock grove that stands where so many lives were lost that day in southwestern Pennsylvania. Here, the Flight 93 National Memorial draws visitors to the grove’s almost cathedral-like canopy.

But for hemlocks to endure at this site, bearing witness to history, it takes the teamwork of partners led by the National Park Service (NPS). Among those partners is the Forest Service and their behind-the-scenes role defending the lofty hemlock from a tiny yet formidable threat — hemlock woolly adelgid.

Flight 93 was the last of the four hijacked planes to take off on the morning of Sept. 11, 2001. When reports of the other flights began to reach Flight 93’s passengers and crew, a group attempted to take back control of the plane before it was crashed by the hijackers in a field near Shanksville, PA. This group’s heroism prevented the plane from reaching what was likely a Washington target. 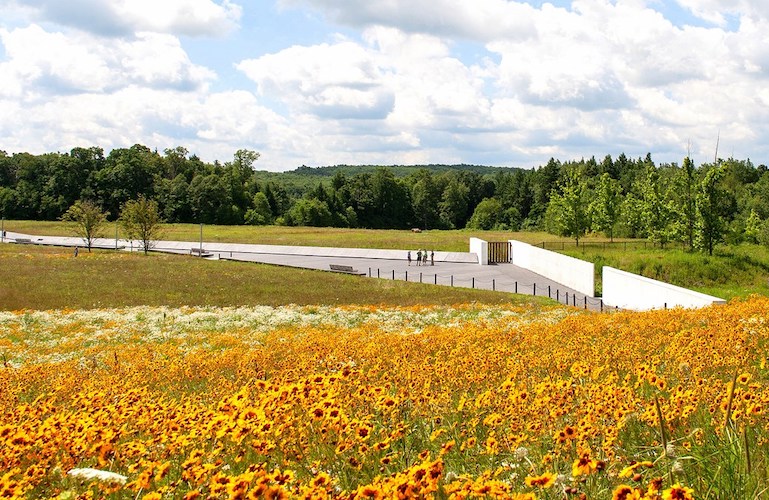 The Memorial Plaza culminates at the Wall of Names. The field beyond is the crash site and serves as final resting place (Photo: NPS/Chuck Wagner)

Dedicated in 2011 and administered by the NPS, the Flight 93 National Memorial includes the 38-acre crash site and encompasses over two thousand acres. With the reforestation effort taking place on this former mining site, about half of those acres are now forested.

While the larger memorial includes a mix of tree species, at its core is an 11-acre grove of almost all hemlock trees. This grove was standing when the plane made impact 20 years ago, and some of these witness trees were marked by the crash.

“There is fire scorch on some trees there,” said Rick Turcotte, a Forest Service forest health group leader who supports work on the hemlock grove. “There were materials in the trees and paint on some of them. They witnessed the crash and have the scars from what has happened there.”

Hemlock trees are so central to the memorial that they are reflected in its design. Panels incorporating hemlock bark line a walkway that follows the path of the plane when it struck the ground. New hemlocks have been planted to fill in the edge of the forest where the crash cut into it.

“The goal is to always sustain hemlock in that area,” Turcotte said.

For nearly 20 years, at the NPS’s request, the Forest Service has provided technical and financial assistance to manage insects, diseases and weeds at the memorial. All three Forest Service branches — the Eastern Region State & Private Forestry, Northern Research Station and the Allegheny National Forest in northwestern Pennsylvania — are involved in the hemlock effort. Among the key State & Private Forestry contributors are Turcotte, forest stewardship coordinator Amy Hill and entomologist Bill Oldland. 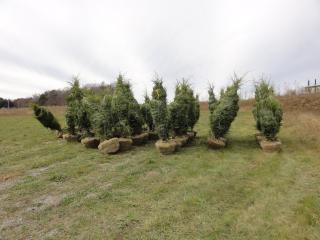 Becoming part of this effort “was an honor,” Hill said. “It gave a whole new meaning of the term, a sense of purpose.”

The Forest Service recommends strategies for suppressing hemlock woolly adelgid, while the NPS, as the site’s land manager, makes the decision. To date, the primary treatment has been chemical control, an established, effective approach.

With one round of chemical treatments, hemlock woolly adelgid at the memorial are currently at a manageable level. But they are not eliminated, and the challenge to control their population will continue.

The future of hemlock at the Flight 93 memorial depends on the teamwork of dedicated agencies, organizations and individuals. Yet the essence of this memorial is something beyond these human contributions.

“Memorial sites that we’re familiar with, a lot of those are manmade,” Hill said. “This one is special. It’s natural, it’s a living memorial. We will come and go as we leave civil service, but that grove should always be there. It’s a place of healing, for both people and the land.”

Want to talk with peers about tree care? Visit the Tree Care Forums on LawnSite.com.