To a plant, rain is life-sustaining water. So why has an international team of scientists made the surprising discovery that a plant’s reaction to rain is close to one of panic? 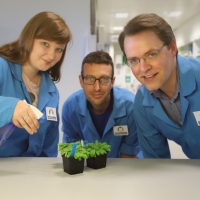 Scientists discovered plants boost their defenses during rain, a time when many diseases are transmitted. Photo from University of Western Australia.

It’s not as illogical as you might think. The research, published in Proceedings of the National Academy of Sciences last fall revealed complex chemical signals involving the plant’s defenses are triggered when water lands on a plant. “As to why plants would need to panic when it rains, strange as it sounds, rain is actually the leading cause of disease spreading between plants,” said researcher Professor Harvey Millar of the University of Western Australia’s School of Molecular Sciences and the ARC Centre of Excellence in Plant Energy Biology.

He added, “When a raindrop splashes across a leaf, tiny droplets of water ricochet in all directions. These droplets can contain bacteria, viruses, or fungal spores. A single droplet can spread these up to 10 metres to surrounding plants.”

Millar said after spraying plants with water and observing the effect, the researchers noticed a chain reaction in the plant caused by a protein called Myc2. “When Myc2 is activated, thousands of genes spring into action preparing the plant’s defenses,” commented Millar. “These warning signals travel from leaf to leaf and induce a range of protective effects.”

Evidence also suggests that when it rains, the same signals spreading across leaves are transmitted to nearby plants through the air. “One of the chemicals produced is a hormone called jasmonic acid that is used to send signals between plants,” Millar said. “If a plant’s neighbors have their defense mechanisms turned on, they are less likely to spread disease, so it’s in their best interest for plants to spread the warning to nearby plants.” He added, “When danger occurs, plants are not able to move out of the way so instead they rely on complex signaling systems to protect themselves.”

Professor Millar said it was clear plants had an intriguing relationship with water, with rain a major carrier of disease, but also vital for a plant’s survival.

The international team of scientists also included those from Lund University. The study was conducted in collaboration with SLU Umeå, The Salk Institute for Biological Studies, Ghent University, VIB Center for Plant Systems Biology, La Trobe University, and the Commonwealth Scientific and Industrial Research Organisation (CSIRO). For more information on the research, visit here. For an article on protecting properties from rainstorm damage, visit here.

Previous post Keeping Your Compact Track Loader Up And Running