Regardless of the property size, communicating with clients is absolutely critical before, during and after storms to ease anxiety.

When a big storm is on the horizon, Tim Gibbons, CEO and president of The Service Innovators (TSI) in Chicago, sends out notifications to his clients, saying: “‘We see this storm coming and we expect it to be a very severe storm. Our plan is [this],'” he explains.

Larger sites are assured that there will be a constant presence; smaller sites may be alerted that they won’t be plowed constantly, but that the crews will be returning on a consistent basis.

Regardless of their size, communicating with clients is absolutely critical before, during and after storms. Many clients will get nervous, so it’s best to be proactive and keep them continually updated. “In that way, we can not only allay some of their anxiety, we can prevent an inordinate number of inquiry calls to our call center,” Gibbons says.

TSI uses dispatch technology that not only allows the company to track where equipment is in real-time (and move resources around as needed), but also gives clients access to a web portal where they can see when a crew started working at their site and when the job was completed.

“Being able to supply that critical information is important,” Gibbons says. “If you give information to the client, that reduces their panic and fear that it’s not getting done.” He also asks clients to understand that during major storms, it may take a little longer than normal to get everything cleared. 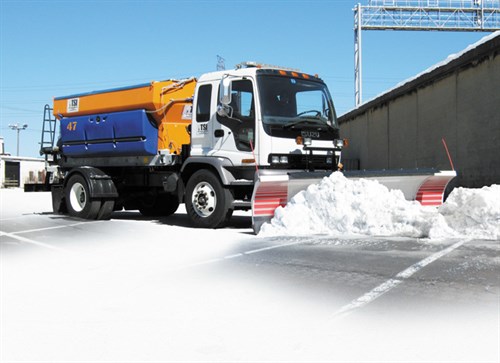 It’s best to communicate your strategy with clients before an event to set clear expectations and keep the phone calls to a minimum. Photo: The Service Innovators

Communication is exactly the reason that Vincent Di Leonardo, president and CEO of Empire Landscaping and Snow Plowing in New York, prefers to stay in the office during storms. “I field calls, and I also like to communicate by email and text with certain customers,” he says. “Especially during bigger storms, they get really nervous. They’ll call my managers on-site about whether they’re going to be able to open. Once I hear about that, I have to jump in, or otherwise my guys are having to field calls instead of making sure the work gets done. That’s counterproductive.”

Di Leonardo adds that it’s important you don’t assume that the pressure of a big storm is off as soon as the snow stops falling. “The pressure is probably worse then, because everybody expects everything to go back to a normal state within two hours of the snow stopping,” he says.

In reality, that’s not possible, so he lets his clients know that after big storms, it may take crews a week to remove and relocate snow, deal with refreezes and get everything cleaned up.