Falling snow summons the bulk of the troops for Sneller Snow Systems, Byron Center, Michigan, which employs about 200 full- and part-time workers during snow season. Because only 20 percent of its revenue comes from summer landscaping work, vice president Dan Sneller decided to change the company’s name from Sneller Landscaping to Sneller Snow Systems, which better reflects the November-to-April work that brings in the bulk of its revenues. There are about 20 snow events per season in the Grand Rapids area where Sneller works, and 99 percent of his business is commercial.

Snow season preparation is a year-round effort, and being prepared paid off big time in November 2014, when 30 inches of snow hit the area. Normally the season starts slowly, but this particular snowfall delivered about 40 percent of the seasonal average all at once.

That November storm was something else, Sneller says. “We started with a 1-inch snowfall, and the next day we got a 16-inch storm. It was a very busy stretch of weather, followed by an inch of snow in the entire month of December. While we were working around the clock for a time, I am amazed at how smooth everything went. 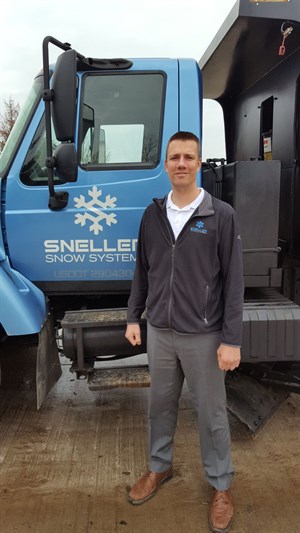 “Once we got a break in the weather, our operations teams were able to get some rest because we were able to keep up with the storm instead of digging out for days afterward. Our mechanics had the day off since they had the equipment task list completed. This is a blessing from God and goes back to planning all summer for the next snow season, having a good system that can run smoothly, a solid preventative maintenance program and an amazing team to make it all happen,” he explains.

Sneller’s biggest challenge is sidewalk staffing. “We have a lot of great people that work in this role each year, but it tends to be the area where snow companies experience a higher rate of turnover,” he says. “It’s a tough job when the weather is relentless, and when the weather is quiet, some people look for more regular employment opportunities, so it’s important to make sure we are maintaining a full crew.”

If preparation is the first step toward success, the ability to find creative solutions to tough challenges might be the second step, as Sneller found out a few years ago when he took a job for an outlet mall.

“The specs limited us to a 3,000-pound weight limit, although snow still had to be carried up to 400 feet from interior areas out to the parking lot before being carried away by larger loaders,” he says. “After evaluating many options, we assembled a fleet of Ventracs and John Deere tractors, all equipped with custom-built V plows and pushers.”

There’s no question that unpredictable winters have kept Sneller on his toes. How does he stay sane during a busy snow season?

Full staffing and faith are the winning combination. “When there are so many things that are beyond my control, I take comfort in knowing that the Lord is in control of all things,” he says. “We have been blessed with an amazing, dedicated team in every level of the organization, and it’s a pleasure to work with them. Busy and chaotic would be a nightmare, but busy and organized — with a great team and good procedures — is a lot more enjoyable.

“One thing that has been very helpful for us is having an evening shift to take over. This allows the early-morning and daytime managers and operators to get some rest before starting again the next morning, even when the weather is relentless,” Sneller says.