Adapted from the National Snow and Ice Data Center (NSIDC): All About Snow/Snow Removal. Accessed November 20, 2019. Originally published as “Have snow shovel, will travel,” in 1997 by Laura Cheshire.

Ever wonder how modern day snow plowing came to be? 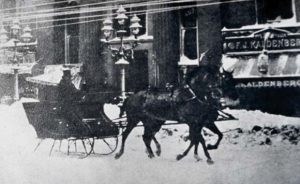 The Great Blizzard of 1888 in NYC. —Credit: National Oceanic and Atmospheric Administration & NSIDC

Interestingly, the first attempts at snow management were not about snow removal, but about compaction. Snow would be flattened for sleigh traffic by “using heavy logs chained under sleds, or large weighted rollers pulled or pushed by oxen or horses,” according to a 2016 article in the Bangor Daily News. Donald Sargent’s Union Iron Works in Bangor, ME, which opened in 1827, produced the Sargent snow roller, a large wooden barrel that would essentially compress the snow into a level surface.

Ordinances in many cities required homeowners to clear their sidewalks, but snow removal was not yet practiced on a citywide basis. Residents and merchants were responsible for clearing their own streets so they frequently hired snow shovelers. As a result, wintertime travel in early 1800s was still mostly by foot.

Enterprising inventors were issued the first patents for snowplows in the 1840s, but several years passed before the plow designs were put to use. One of the first mentions of snowplow use comes from Milwaukee in 1862. The plow was attached to a cart pulled by a team of horses through the snow-clogged streets. Over the next several years, horse-drawn plows gained popularity and came into use in many other Northeastern cities. Intercity steam trains also made their way through heavy drifts with giant plows attached to their front ends. Salt was used in a few cities, but residents strongly protested salting because it ruined the streets for sleighing and damaged shoes and clothing. 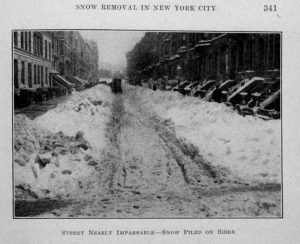 Plows were a boon to city dwellers. However, plowing also created a new round of problems, some of which remain today. Plowing cleared the main streets, but effectively blocked side roads and sidewalks. Business owners and residents initially hailed the plow’s success, but later complained and even brought lawsuits against plowing companies. Sleigh drivers also found fault because of the ruts and uneven surfaces plowing created.

New York and other cities responded by hiring horse-drawn carts and shovelers to work in conjunction with the plows, hauling away the plowed snow and dumping it into rivers. This not only cleared snow mounds, it created thousands of temporary jobs. In an effort to curtail the use of salt, which many still protested, streets and icy bridges were coated with sand instead. 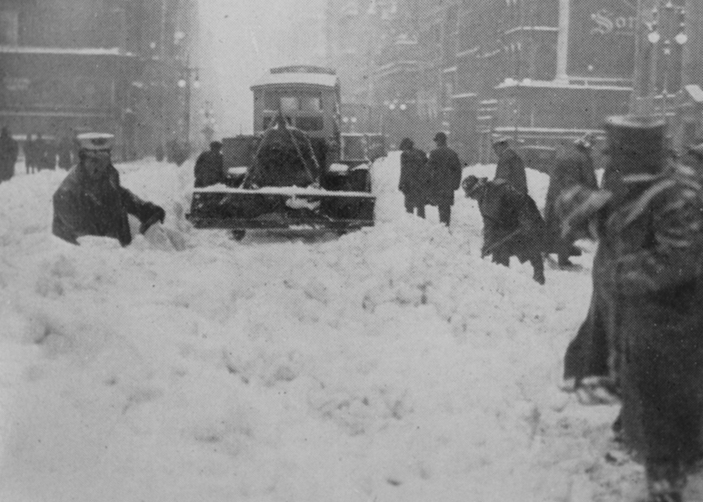 Clearing snow from 5th Avenue in NYC in 1926. —Credit: National Oceanic and Atmospheric Administration, from Handbook of Snow Removal & NSIDC 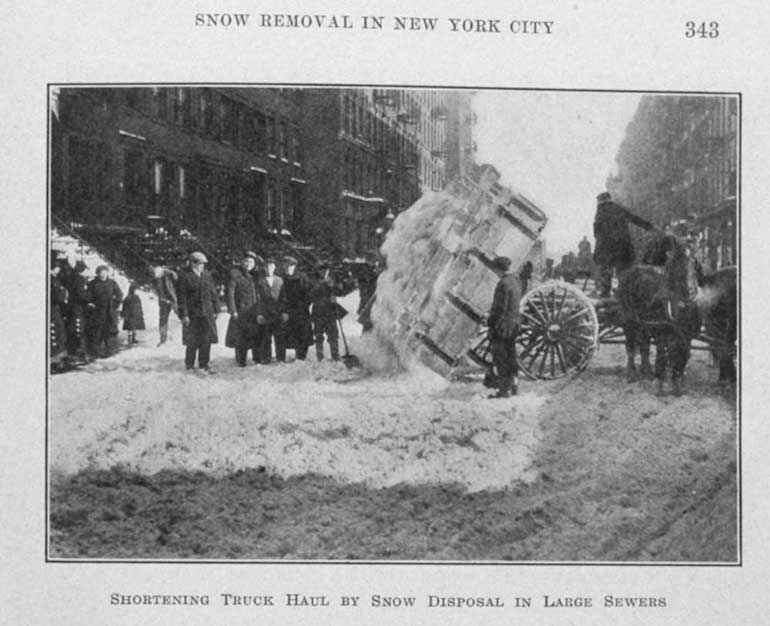 Motorization swept the country in the early 20th century, leading to motorized dump trucks and plows as early as 1913. Many cities rushed to motorize their snow removal fleets, abandoning their horse-drawn carts. In conjunction with the new trucks, cities began to use tractors equipped with plow blades. To haul the snow away, they used steam shovels, cranes, and railway flatcars to get the snow off the streets and dumped into the rivers.

Another motorized invention, the snow loader, was successfully tried in Chicago in 1920, and several cities purchased snow loaders that same winter. The snow loader was an ingenious contraption. Riding on tractor treads, it was equipped with a giant scoop and a conveyor belt. As the snow was plowed, it was forced up the scoop and caught by the conveyor belt, which carried it up and away from the street. The snow was then deposited into a chute at the top where it was dropped into a dump truck parked underneath. The snow loader made snow removal much easier and more effective.

The popularity of the motorcar created a whole new set of problems for snow removal crews. As motorcars took to the streets, public safety demanded snow removal efforts even for a snowfall of less than four inches. Due to increased auto dependence, not only did main thoroughfares need clearing, but residential streets as well. Abandoned or parked cars posed plowing obstructions and ensuing complaints of buried vehicles.

Slick layers of ice left behind by snow plowing renewed demands for salt and sand. No longer concerned about protests, city officials started using salt by the ton to ease road conditions and also experimented with cinders and sand. Motorized salt spreaders became the primary tool in fighting snowy roads, and individuals used salt to keep driveways and sidewalks ice-free. Environmental experts discovered in the late 1960s that salt use was corroding cars, damaging roadside plant life, and polluting water supplies, and its use remains controversial today.

Eventually shopping centers, office parks, and more saw the need for private snow plowing equipment and/or services to clear parking lots for their employees and customers. This created a market for smaller, customized equipment, and spurred technological innovations and increasingly specialized functions.

Do you know any local plowing history? Post your stories or photos in the Comments section below! 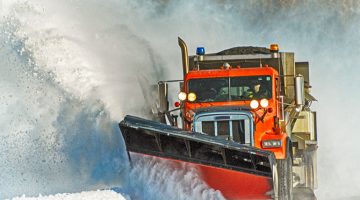 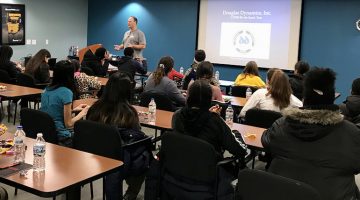