An in-depth look at where the snow flies and how to capitalize on this year’s weather.

It’s the kind of list you want to be on if you’re a skier, a snowmobiler or a snow-management pro. For everyone else, having your home state on this list is a dubious honor. We set out to identify the snowiest states in the U.S. — the places where, year-in and year-out, the snow keeps piling up and plows keep pushing it back.

Trying to assemble a list of the snowiest states is trickier than you might think. It’s easy to single out the specific places that get the most snow. The top of Mt. Washington in New Hampshire, the highest peak in the Northeast, gets an average of 282 inches of snow each year. However, the only people there are meteorological researchers living in a reinforced concrete bunker.

Out West, Mt. Rainier is usually the snow king, with an average of 645 inches annually. But we were interested in determining the snowiest states overall, not the snowiest locations within a state. Besides, we’re looking at this from a snow and ice management perspective, so we didn’t want to look at snowfall atop mountains. We wanted to look at the places where people live and snow services are required.

The criteria we used

We started with a list of the five most populous cities in each state, recorded the average annual snowfall for each of those cities, then calculated the average of those figures. The hope was that, by working with the five largest cities in each state, we’d be incorporating some geographic diversity, and get a sense of just how snowy the state is overall — at least in populated areas.

Of course, that left out states like California. The northern Sierra Nevada mountain range gets absurd amounts of snow (751 inches, or nearly 63 feet, in 2016-17 alone), but the state’s population is mainly in southern cities like Los Angeles and San Diego, where snow is practically unheard of. Ditto for Oregon, where the snow piles up in the Cascades, but the average for the five most populous cities (Portland, Salem, Eugene, Gresham and Hillsboro) is just 3.82 inches a year.

Then there’s Pennsylvania. Erie, which has the state’s fourth-highest population, is one of the snowiest cities in the country, averaging 101.2 inches annually. But when you factor in Philadelphia (22.4), Pittsburgh (41.9), Allentown (32.9) and Reading (44), you end up with an average of 48.48 inches for the state. Michigan was close behind with 46.4 inches. That’s nearly 4 feet of snow annually — impressive, but not enough to crack the top 10 on our list.

In fact, all of our top 10 snow states came in with more than 50 inches annually (honorable mention goes to Utah, which just missed the cut with a tally of 50.12 inches). A wide swath of the country is represented, from far-west Alaska to far-east Maine, from Colorado in the Rockies to Minnesota in the upper Midwest.

Ultimately, the winner — by a fairly comfortable margin — was tiny Vermont. What it lacks in size, it makes up for in snowfall. And, because it’s so small, every part of the state is snowy, so there are no warmer-weather cities to drag down the average.

The silver medal goes to New York. If the competition had been focused on just one portion of the state, it may well have taken the top spot. Western New York, thanks to copious amounts of lake-effect snow from the Great Lakes, is one of the snowiest places in the country. In fact, Syracuse, with 123.8 inches annually, was the snowiest city on our list.

Why the snow goes where it goes

Assembling this list was a fun exercise, and certainly there are bragging rights on the line, but we wanted to dig a little deeper to find out why some of these states get so much more snow than others do. Obviously, all of the states on the list get plenty of cold weather in the winter, but there’s more to it than that, explains Roger Hill, a meteorologist who provides weather services to a variety of clients, from radio stations and utility companies to municipal road crews in — fittingly — Worcester, Vermont, where he resides.

“It’s a combination of things,” he says. “Obviously it takes cold air to produce snow. But the Dakotas are super cold, and eastern Montana is cold, but it’s not that snowy there, really.” Moisture is also required. “So you have sources of moisture, like the Great Lakes, and downwind of the lakes, you get these plumes that really unload tremendous amounts of snow. That’s why you hear of places like Buffalo and Syracuse and Rochester in New York getting so much.”

In Vermont and other New England states, snow often piles up thanks to nor’easters — storms that draw moisture from the Atlantic Ocean and then dump it inland. “That’s what pushes the snow totals up for us,” Hill says. “But not all of our snow is from nor’easters; it’s also frontal systems and Alberta Clipper systems and little, frequent snowfalls that add up over time.” 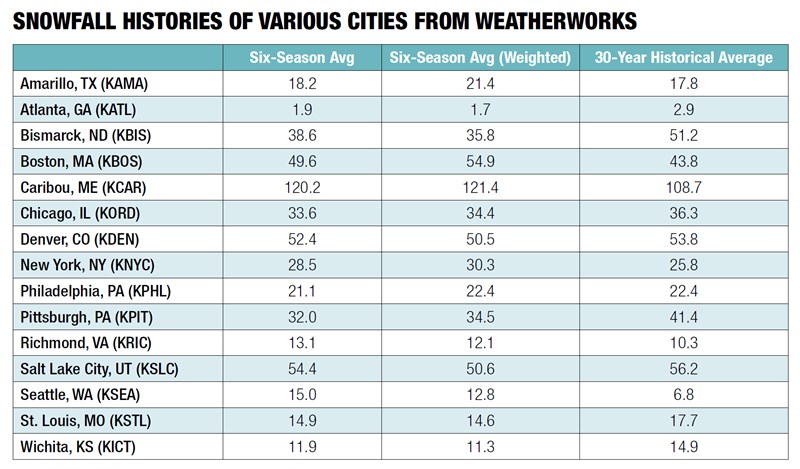 Hill says that in recent years, the Northeast has been getting more snow. “What’s happening is that all precipitation, whether it’s rain or snow, is increasing in the Northeastern U.S.,” he explains. Part of that is just plain physics. As the temperature rises, it holds more moisture – but there’s another factor in the mix. “The jet stream is slowing, and when the jet stream slows, you get these waves, and the troughs and ridges are much more amplified. The pattern defaults and locks into a trough in the East and a ridge out West, so for a period of time, you’ll have many storms going over the same area. The Northeast lines up like that better than most places do.”

So there might be fewer storms, but more snow from each storm in certain regions. “When it does snow, it snows more,” Hill says. “The key words are ‘erratic’ and ‘variable.’ It’s all produced by climate change, and that’s all related to the loss of the ice up in the pole. It’s only going to get worse.”

The increased variability means that weather these days is “less calendar-like,” Hill says. “It used to be that, when it got to Thanksgiving in New England, we knew it was going start being snowy, with slight variations. Now, it’s highly variable. It could be January and all of a sudden it’s up to 65 degrees and the snow melts … and then we have a rain event, with just a tiny bit of snow at the end.

“And what this increasing variability means is that there’s more ice than there ever has been.” That means road maintenance crews require bigger budgets for materials to treat that ice.

Hill says that in his profession, the variability makes it more difficult to forecast individual storm events. Even the modeling algorithms, which use historical climatology, are confused by the changing climate and weather patterns. And that’s planet-wide, not just in certain parts of the U.S., he points out. “Past about five or six days out, the model verification falls off dramatically,” he explains. “So if you hear a seven- or 10-day forecast, treat it with a grain of salt. Or a little bit of sand!”