The landscape/lawn service industry has grown enormously (and become increasingly sustainable, if you will) this past half-century because of the creativity of individuals who didn’t accept the status quo.

They drew upon their in-the-field experience and trusted their instincts and Yankee-know-how to produce uniquely new products and equipment that allowed them (eventually all of us) to offer and perform property management services faster, with less effort and less cost and still produce customer-pleasing results.

The technology born from their dreams and their tinkering raised the bar in terms of what can be done. It spurred the emergence of our full-fledged industry. It has also provided the public with a range of range and quality of landscape services that few of us could have imagined a generation or two ago. New technology in our landscape/lawn service industry builds wealth and improves the appearance, safety and, yes, ecologies of our urban environments.

Some of these visionaries have been forgotten and some are still remembered. What’s certain is that other creative people in this industry will develop and share new and innovative ways to offer our products and perform our services. The process will continue as long as there’s a landscape industry.

That said, the editors of Turf thought it would be fun to review five products and product categories they feel that have had a profound, lasting and positive effect in shaping the modern landscape industry:

1.) The ChemLawn Lesco spray gun: What’s so remarkable about a lawn application spray gun? Let’s start with its longevity in the market, it’s continuing usefulness. The Equipment Research Center ChemLawn developed the “gun” and put it into service in 1976. It has just four moving parts and has been modified and copied over the years. Even so, it’s still widely used by applicators. As a sign of the times, one model is made in the U.S.A. and another in China, we’re told.

2.) The zero-turn radius mower: Lyndon Johnson had just started his campaign for president in the spring of 1964 when John Regier, a self-acknowledged tinkerer with no formal education in engineering, started building the first 36-inch-wide zero-turn mower. Working in a small shop in Moundridge, Kan., Regier eventually produced 24 of the mowers, which he named the Hustler. He reportedly lost money on every unit, according to reports. In nearby Hesston, Kan., management there, seeking to diversify what had been a strictly ag equipment business, took over manufacture of the zero-turns, and began producing units for the commercial and industrial markets with a 65-inch cut. It’s unclear (at least to Turf’s editors) who was truly first, because Grasshopper, also located in Moundridge, Kan., claims to have manufactured the first “commercially viable zero-radius” mower in 1969, the year of its founding. In 1974, Dixon, which acquired a patented transaxle, registered the ZTR designation, which it retains. Manufacturers have been refining and adding to the utility of zero-turns ever since.

3.) Mini and compact construction equipment: You wouldn’t describe Roger Braswell as a tinkerer, but when he formed Dingo Digging Systems and introduced the Australia-bred mini-construction equipment to the U.S. market in 1995, he popularized a category that has since revolutionized how landscape pros efficiently save labor doing big jobs in on small properties and in tight spaces. Two years after their introduction, Toro began manufacturing the units with their many labor-saving attachments under the Toro brand name. In 1997, another Austialian-inspired import, the Kanga Loader, made its appearance in the North American market. Other manufacturers have since joined the mini party For the record: Braswell, the founder of Southern Tree & Landscape, which was sold in the 1990s, is now the CEO and president of Compact Power Equipment, which he founded in 2003 in Fort Mill, S.C.

4.) Stand-on mowers: In 1988, Jim Velke, a mechanic at Lawn-Wright, a lawn maintenance company founded by Bill Wright in 1981, began working on a device to allow the operator of a walk-behind mower to ride instead of walking. Thus was born the Velke, which Velke and Wright began producing in Wright’s allied but small manufacturing business. In 1993, Wright sold the maintenance company to concentrate on manufacturing. Soon thereafter the two men collaborated to produce a riding mower that would allow an operator to stand up while mowing. In 1997, the first Wright Stander rolled off of Wright Manufacturing’s assembly line. That particular mower category grows in popularity year after year.

5.) Material dispensing units: Landscape/lawn service contractors have to move lots of heavy, bulk material such as mulch, bark and stones to perform their many different services. It’s expensive to move the material, but even more expensive and labor-intensive to load, unload and spread it. Credit visionaries like Charles Finn, founder of Cincinnati-based FINN Corp. in 1935, with making the job a whole lot more efficient. Starting with a machine that chopped and applied straw for mulching bare soil, the company followed up in 1953 with the industry’s first Hydroseeder. The product category got another huge boost in 1994 when Rexius, Eugene, Ore., came out with its first Express Blower trucks, which allowed contractors to dispense tons of material a day with remarkably little labor. In 2002, Rexius sold the division to FINN. 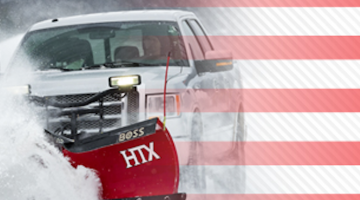