From Farming to Sod Production

Double Springs Grass Farms in Searcy, Ark., serves niche markets, according to owner George Friedrich. The markets are widely diverse and range from specialized grass needs, such as shade and wear-tolerant grasses, to specialized installation needs. In addition to growing about 2,400 acres of sod in central Arkansas, Double Springs subcontracts complete sod installation jobs of every type. Working from a business plan perspective, Friedrich has responded to market needs in growing products and offering services. That approach has allowed his business to grow from the start, even when little awareness of the sod industry existed.

“I’m a fifth-generation farmer from California,” Friedrich said. “We grew fruits, vegetables and nuts.” Transferring his agricultural background from the California fields to Arkansas wasn’t such a big jump with agricultural principles pretty much the same across the country, and his early work in marketing encouraged him to transfer those same concepts to sod production. His approach to sod production is similar to the approach used in manufacturing. Friedrich remains a strong proponent of developing products in response to market needs. Double Springs produces a number of certified turfgrasses that include zoysiagrass, bermudagrass and ultradwarf bermudagrass to serve Arkansas and surrounding southern states.

Friedrich got into the sod business as an outgrowth of his solving a problem in a housing construction project. “I was involved in a housing development outside of Little Rock in 1972,” Friedrich said. Significant erosion problems surfaced on slopes, and rains continually washed away seeding before it could be established. “We began cutting slabs of common bermudagrass from a field and transporting them to the development to solve our erosion problem,” Friedrich said.

“People saw our trucks hauling the sod and began stopping our drivers to ask where they could buy the sod slabs,” he said. “There was only one turf farm in the state. They would go to Texas and bring back improved turf to sell here. At the time, the sod industry was in its infancy, and we had no distribution channels. We were successful in selling the common bermudagrass. We developed our market to anybody who would pay for sod.”

“We decided to expand the market and wanted to help develop an awareness of sod,” Friedrich said. He developed a commercial relationship with Kmart and Woolco, discount stores that were then operated by S.S. Kresge and F.W. Woolworth. “We sold trailer loads to their stores located in the Little Rock area. They did the advertising. We kept track of the weather forecasts and told them not to advertise if rain was forecast. They would plan on the weather,” Friedrich said.

Those markets served as ready outlets for Friedrich’s sod at the start of his operation and continued for several years, helping to develop an interest in sod among homeowners. A few years later, developments within the discount operations changed the direction of Friedrich’s marketing. “Woolco went out of business, and Kmart centralized its advertising,” Friedrich said.

“With those markets gone, we began selling more to landscapers and directly to homeowners,” Friedrich said. Double Springs also expanded into golf course renovation just ahead of the golf construction boom of the 1980s. Arkansas has a major tourism business and a number of retirement communities. One of the primary draws to the state are the normally mild winters, encouraging a high number of golf courses. “In 1978, we had a very cold winter,” Friedrich said. “The majority of Tifgreen golf courses in the state lost greens during the winter. Tifgreen hybrid bermudagrass is known for its ability to withstand heavy wear and high temperatures, but like most bermuda is not bred.

“Steve Rolston at Burns Park in North Little Rock called me and said he heard we had 328, and asked if we could fix his greens. We devised a process to repair the greens. We aerated, verticut and sprigged. We had perfect weather, and in four weeks they opened the course,” Friedrich said. “That’s how we got into the golf course renovation business.”

Friedrich cited taking care of the soil needs by adding appropriate nutrients as a major element in sod production. “We treat our soil like a manufacturing facility,” he said. His early work in marketing with Mattel and Colgate formed the basis for his approach to agricultural production, marketing and distribution.

Double Springs sells standard rolls, designated mini rolls and big rolls of turf, as well as squares that are popular with homeowners. Nine sod harvesting machines are used and include Bucyrus Magnum harvesters for big rolls and Brouwer harvesters for mini rolls. “We still have the first Ryan we got in the 1970s,” Friedman said.

Progressive mowers are used to cut the grass, and Double Springs maintains its own delivery fleet. Delivery trucks carry Donkey forklifts, and Case forklifts are used in the fields.

Since sod demand is down, Arkansas has lost a number of sod producers, with many converting to row crops. While the decline in demand has had an impact, Friedman said that sod producers will ride out the decline. He noted that weather conditions play major roles in year-to-year sales, and says the almost 40 percent drop in sales in 2009 could be attributed to the nearly 100 inches of rain that fell in the region that year.

“Every inch of our sod is irrigated,” Friedrich said. Mostly center pivot irrigation is used with 3-inch solid set pipes in place.

“We follow the NTEP tests very closely,” he said. “We look at new varieties that have good results. We send material to the University of Arkansas to be used in studies, and we work closely with Aaron Patton and Mike Richardson on turf studies. We use a lot of organics; we recycle all our clippings.” Clippings are vacuumed and composted at the farm site, and after harvest they are later applied to the soil, contributing to the organic matter of the soil.

“Products evolve,” Friedman said. “Climate conditions change, and new varieties are developed in response.” He cited the popularity of bentgrass greens, but noted it suffers in heat and humidity. He also noted the increasing popularity of ultradwarf bermudagrass, which can better tolerate heat when there is no cooldown to provide the recuperation needed by bentgrass.

Friedman’s son, Christian, and daughter, Gretchen, are both involved in the business, and the company employs about 75 people for sod production and sales. Friedrich has an undergraduate business degree and an MBA from San Jose State University. Double Springs is a member of Turf Producers International (TPI) and state turfgrass associations of Arkansas, Tennessee, Oklahoma, Alabama and Louisiana.

Nancy Riggs is a freelance writer and has been covering the green industry for Turf for almost 20 years. She resides in Mt. Zion, Ill. 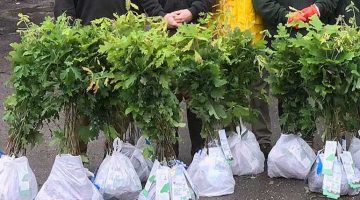