The general economic outlook for the green industry in 2011, according to a top horticultural economist, is for a gradual improvement, but there could also be a loss of more landscape companies in the meantime.

Charlie Hall, the Ellison Chair in International Floriculture in the department of horticultural sciences, Texas A & M University, says the signals are mixed for the U.S. economy as a whole. Leading economic indicators have trended upward every month for well over a year, and that includes housing. However, unemployment is still at about 9.5 percent nationally, about double the normal, so people are led to believe the opposite. “All indicators are that things are a bit more positive than many folks think,” Hall says. Government labor statistics indicate that monthly unemployment claims are declining, with figures on overtime and part-time employment also showing that more labor is needed. Ultimately, that will translate into more full-time positions.

Texas A & M participates in the Green Industry Research Consortium, which surveys all of the green industry nationwide for economic facts. That was a $148 billion industry in 2005, including growers, landscapers and retail outlets. The figures for 2010 have not been compiled yet, but Hall says the green industry has been somewhat “recession-resistant,” and showed an increase in sales during the early stage of the downturn. The recession technically ended in June 2009, but that didn’t help segments that were hardest hit.

“The crucial one is housing,” Hall says. A large inventory of new homes will have to be sold before new construction will kick in, but that segment is slow. “The maintenance side has picked up a bit, but the construction side is still depressed.”

Some construction is going on, but mostly in the Midwest down into Texas. The states hardest hit by the halt in construction are California, Florida, Michigan, Nevada and Arizona, which were also the boom states in good times. Hall notes that each region has its individual problems and some areas will bounce back more quickly. The more diverse each region’s economy, the more quickly it will recover. States with one major industry, such as Michigan and its auto manufacturing, will take longer.

Lawn and landscape maintenance figures have improved somewhat as the recovery proceeds. Hall says that in hard times, some clients become do-it-yourselfers, but now some are again hiring a company to mow the lawn and trim the trees. That goes for commercial landscaping, too. Those “pragmatic spenders” may also start to phase-in delayed construction jobs this year. Landscaping profits are smaller in maintenance, but it is a steady segment and can carry a diversified company until installations start up again.

The difference in how the turfgrass industry fared can be seen in two different segments, Hall says. Sod farms have been particularly hard hit as home construction dropped and cheaper seeding methodologies were selected, but sports facilities must maintain their properties and are still hiring.

Commercial landscaping must also be maintained, but “all bets are off” regarding maintenance contracts, Hall says. There is less loyalty, even to long-term contractors, than in the past, and price is more of a factor. In times like these, companies must be open to renegotiating every contract in order to retain clients.

In the retail sector, consumers are still spending. Overall spending is at the same level as in 2007, which is good news because that was before the recession settled in. People who were spending in 2007 are still spending, for the most part, and the more frugal folks are starting to also buy green products, or will as the recessionary forces end and jobs become available. As retailers sell more, services could also be more in demand. That depends heavily on one factor, however.

“The more progressive firms do a good job in marketing,” Hall says, and good marketing is key to survival and recovery. He says that since the recession started, about 15 percent of landscape companies have exited the industry, and 30 to 35 percent have survived, but had flat sales. Another 30 to 35 percent have had declining sales.

The remaining companies were the ones with good sales, and in general, Hall says, those are companies that are good at articulating to their customers the value of their services. “They’re the ones that will be doing OK in 2011,” he says. The companies that are not resilient, the ones that are struggling now, will be the ones that will be lost to the industry this year. The good news is that there is a larger labor force available out there now than there was prior to the recession, and as the economy picks up they will be available for hiring. As good times return, there will be more competition for those workers.

Lawn and landscape companies around the country that are surviving have very individualized methods of staying healthy. Each company has tactics that have made them resistant to, or even thriving in, the Great Recession. Here are some examples.

“Honestly, every year I grow,” says Jason Palat, owner of Palat Landscaping, Monroeville, Pa., who has been in business for nine years. “The truth is that the economy hasn’t affected me.”

Palat has five employees, including himself, with three trucks. He added the third truck this year, during the height of the recession. He credits his success largely to quality work and to his website, which he built himself to save money. He acquires half of his clients through the website, www.palatlandscaping.com, and the ads on the sides of his trucks give the URL. He also advertises through the local Pennysaver, where he also includes the URL.

The website gives instant credibility over smaller or fly-by-night lawn mowers, and Palat insists that someone might look at 25 companies before picking the one that has an informative web page. The web has become so crucial to his business that he now has some pay-per-click advertising there, and helps set up the same elements on other sites around the country. That boosts company profit, and he has even started to build websites for other companies.

Palat finds that although 50 percent of his business is in lawn maintenance, construction is more profitable. He has been turning down maintenance work to focus more on installation, and now two of his three crews spend their time doing lawn care and wall building, one of his specialties. He is looking forward to expanding in 2011.

On the other side of the spectrum is Benchmark Landscape, San Diego, Calif., a large company that has lost 50 percent of its revenue in the last three years. San Diego is one of the cities hardest hit by the recession, and John Mohn, founder of the company, says that one of the keys to his company’s survival has been careful budgeting.

“We addressed our operational costs on the early end of the recession,” Mohn says, bringing costs in line with the actual budget needed for survival. As a result, the company, now pared down to 220 employees, is financially strong despite reduced work and dwindling margins.

The maintenance division has been crucial to the company’s survival. The company has always made an effort to get contracts to maintain the landscapes they have built, and when new construction jobs were hard to find, those maintenance contracts saved them. Installations are still slow to materialize, but opportunities for obtaining maintenance contracts are good, with pricing finally stabilizing. Knowing the exact budget and being able to meet it is crucial for each job, however.

While laying off field workers and cutting back on benefits, Mohn made one crucial new hire: a salesman. During times like this, it takes a strong sales effort to acquire new business. Even so, the company is still selective with estimating new jobs, taking on only those that they feel will make money. This is important, because he doesn’t see much improvement in 2011 for new construction.

Louisiana Lawn & Landscape started in 1996 and has four to 10 employees, depending on the season. They focused more on the maintenance side of the operation in the last few years. That is fortunate, Owner Charlie Kennon says, because landscape construction jobs have been almost nonexistent in Baton Rouge for the last two years. The “toughest year we’ve ever had” was 2009.

In 2008, Kennon started a new company policy. He started setting aside money each month to create a pool of cash so he could buy equipment without accruing debt. That has not only reduced stress, he calculates it has also given him an 8 to 10 percent raise in revenue because he’s saving that much in interest payments. Even his last company truck, though used, was bought with cash.

“That way, you move your whole billing cycle up,” Kennon says, and the practice has resulted in an earlier acquisition of payments. These two practices have given the company resilience in the down economy and a permanent way to improve cash flow. In the future, he also wants to focus on developing a list of high-end customers the company can focus on, and develop more long-term contracts with those clients.

As for 2011, Kennon says it is difficult to predict what the economy will hold for companies like his. The federal extension of tax breaks for his income range will help, and he’s hoping for the best. What the survey of companies like his shows is that survival in the face of harsh economic times requires a focus on improving business practices, which will carry over as the financial picture improves.

Don Dale resides in Altadena, Calif., and is a frequent contributor toTurf. He has covered the green industry for more than 10 years.

Next post Do You Know Where Your Equipment Comes From? 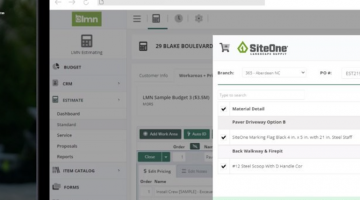