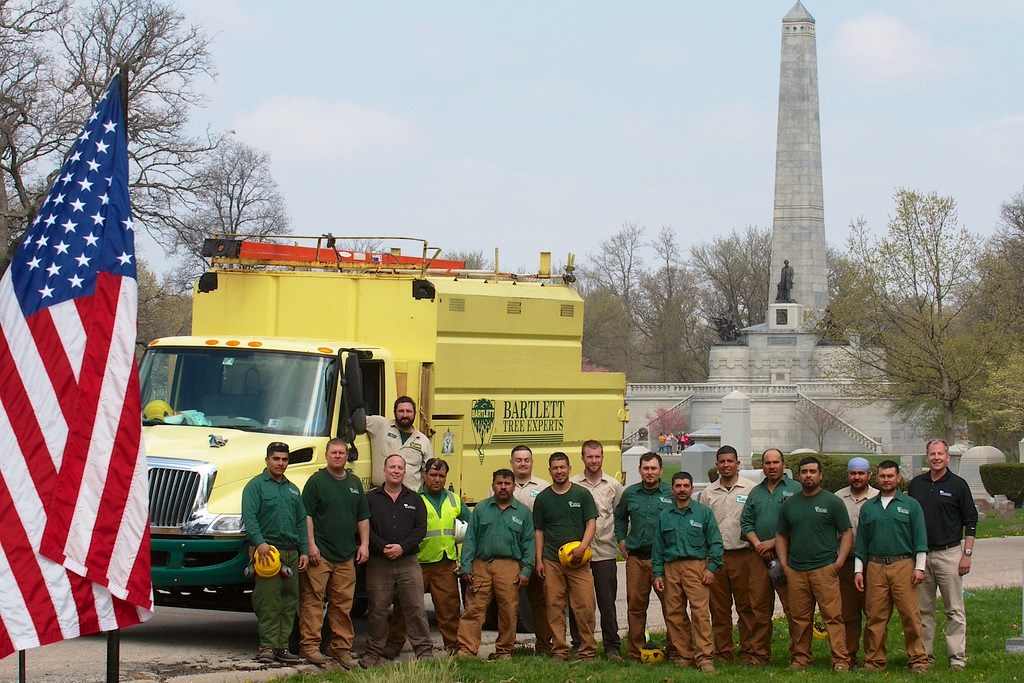 Seventeen arborists from Bartlett Tree Experts donated their time to prepare Oak Ridge Cemetery for the 150th anniversary of the re-enactment of President Lincoln’s funeral.

SPRINGFIELD, Ill. – More than 20 volunteer arborists, some in bucket trucks and others manually climbing, spent a day trimming trees at the historic Oak Ridge Cemetery, some of them “witness trees” that were present 150 years ago at President Lincoln’s funeral. The arborists contributed their services to help the cemetery prepare for the thousands of people who will converge on the cemetery May 1-3 for the sesquicentennial re-enactment of the president’s funeral.

Seventeen of the arborists, from Bartlett Tree Experts, traveled from the Chicago area to care for the historic trees. They arrived the night before the Day of Service so that they could get an early start and perform as much work as possible before leaving in the late afternoon. Others were from Springfield’s Throop & Son Tree Service. 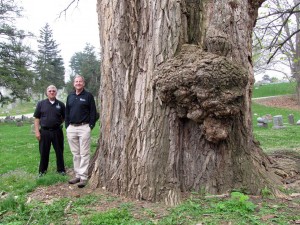 The arborists worked primarily in the area in the cemetery where the re-enactment will take place, in front of the original receiving vault. They also removed dead trees.

Guy Sternberg, of Starhill Forest Arboretum of Illinois College, in Petersburg, helped make the day of service happen. He reached out to the Illinois Arborist Association and Tree Care Industry Association in search of volunteer tree care professionals. “This year, with the sesquicentennial of Lincoln’s assassination and his funeral, there are re-enactments happening nationwide, culminating with the re-enactment of his funeral at the Oak Ridge Cemetery—with the replica train car, hearse, re-enactors as civil war soldiers standing guard along the route,” he said.

Opened in 1855 – and dedicated in 1860 with Abraham Lincoln present—Oak Ridge Cemetery has grown to be the largest municipal cemetery in Illinois. It encompasses 365 acres of rolling prairie land, thousands of hardwoods and conifers, and over 75,000 interments. It has the distinction of being the second most-visited cemetery in the nation, second only to Arlington National Cemetery.  Nearly 1 million people visit annually, not only to pay respects to deceased ancestors, but also to visit the final resting place and pay homage to the nation’s 16th president, Abraham Lincoln. Oak Ridge Cemetery is a National Living Memorial, as certified by the USDA Forest Service.

Next post JCB Donates Equipment To Quake Zone In Nepal