How Many Acres Can You Mow in 24 Hours?

LONDON, Ohio – How many acres of turfgrass can a young man mow in 24 hours?

Why not find out, right?

That’s the challenge that 26-year-old Eli Kean, marketing manager for Dixie Chopper, has set for himself. Kean will take the seat of a Dixie Chopper XCaliber mower with a 74-inch cutting deck and find out just what the mower (and he) can do in a 24-hour mowing marathon.

The goal is to set a new world record of the amount of acreage of turf mowed in 24 hours and have it recorded in Guinness World Records. Of course, this begs the question: What is the current record for acreage mowed in 24 hours? A quick keyword search of www.guinnessworldrecords.com did not reveal any records related to mowing, so whatever Kean and his XCaliber can crank out in 24 hours will set the bar for endurance mowing.

The Dixie Chopper team selected the Molly Caren Agricultural Center in London, Ohio, for the event. This is the site of the annual Ohio State University Farm Science Review with its large outdoor exhibit. The site has approximately 200 acres of turfgrass. “I’m shooting to mow at least 175 acres, and that’s factoring in refueling, eating and other breaks,” says Indiana native Kean. When the Dixie Chopper team came up with the idea this past spring, the thought was to do the 24-event as a group, with operators taking turns on the mower. But after some research, they learned that to set a recognized “world record,” the attempt had to be made by one person.

How did Kean get the honor? “In the marketing department we have two relatively new hires and myself so I was the one that got drafted,” he says with a chuckle. No problem. “Actually, I’m excited about the idea. I enjoy mowing. I have a smaller Dixie Chopper Magnum at my home.” Kean says he and his Dixie Chopper support will arrive at the mowing site in southwest Ohio (about a 3-4 hour drive from Coatesville, Indiana) the day before the event to get everything ready. “We’re going to stay in a hotel overnight and I will be well rested before the event,” he promises. The conclusion of the event is set for Wednesday noon, August 20, is expected to draw a sizable number of spectators and media. A brief Q&A session follows at 12:30 p.m. 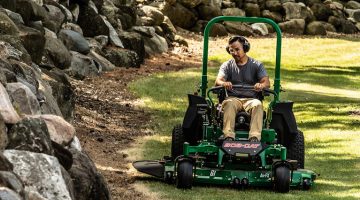