A leader in the power equipment industry for 55 years. 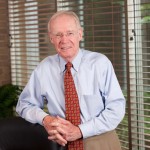 BRILLION, Wis. – Ariens Company today reflects on the life of 83-year-old Chairman Emeritus, Michael S. Ariens, who died at home on February 28. Grandson of Ariens Company founder, Henry Ariens, Mike served as Ariens Company President from 1969–1992 and as chairman of the board from 1992–2014. He celebrated his 55th anniversary with the company in November of 2014 among family and several hundred Ariens Company employees.

“Mike leaves us with a legacy of his personal leadership style, a strength of character that people who work with him want to emulate. As a leader he was thoughtful, and insightful with a great sense of humor,” says Dan Ariens, chairman & CEO. “As a businessperson he was pointedly committed to the company’s purpose: to care for our customers like they are part of the family.”

The company experienced significant growth under his direction, according to Dan. He managed the business through several acquisitions, hundreds of product launches, maturing market shifts and, of course, the un-predictability of the weather. One of the most successful and enduring product introductions under his direction was that of the Ariens Sno-Thro.

In 1982 he led the acquisition of the Gravely brand when the product line revolved around two-wheeled and four-wheeled tractor products. The move set the stage for entering an emerging commercial grounds care sector that ultimately led to the growth of the Gravely professional brand.

“As a leader, one of his most endearing qualities was the one-on-one relationship he had with each member of Ariens Company,” says Dan. “Many remember his personal visits on the day of their company work anniversary. Through his entire career, Mike spent part of each day thanking employees at their workstations for their years of commitment to the company. He continued this ritual through his last day on the job in late 2014.”

Mike was active in the outdoor power equipment industry. As one of longest-serving board members on the board of the OPEI (Outdoor Power Equipment Institute), he held various leadership positions over his career including chairman, vice chairman, secretary and treasurer. He also chaired a number of committees and task forces for the organization.

As part of OPEI he took the lead on several high profile initiatives. In the early 1980s, Ariens represented the industry before the Consumer Product Safety Commission to initiate a more orderly conversion to new safety standards. He led the fight on behalf of manufacturers and dealers for a rational transition. He was also a pioneer in blending rational business compromise among the engine manufacturers and consumers through several landmark emissions standards initiatives. And he was a strong advocate for the creation of OPEI’s own exposition to showcase the industry and its products (today known as GIE+EXPO).

He was a graduate of MIT (Massachusetts Institute of Technology) and Indiana University and served in the Army Corps of Engineers. Prior to joining Ariens Company he worked for the chairman of the board of Cummins Engines.