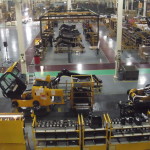 SAVANNAH, Ga. — Thanks to significant growth in a number of key areas, JCB North America experienced a record year in 2014, including the single largest sales year in its history. This growth coincides with JCB’s 70th year in business worldwide, its 45th year doing business in North America and its 15th year manufacturing in Savannah.

Extensive growth in JCB’s North American dealer network has also contributed to the company’s strong 2014 performance. JCB now boasts more than 300 North American locations with a growing number of independent, dedicated construction and agricultural equipment dealerships. The company plans to have 500 distribution outlets in place by 2018.

“Our goal is to continue investing in the North American market,” Mirdha said. “In 2014, we improved our parts and service support, and we’ll continue to invest substantially in these areas throughout 2015. We’ll also continue our aggressive recruitment efforts, adding more professionals to our Savannah and field-based teams. Through all these efforts, we plan to continue meeting and exceeding our market share goals in the years ahead.”