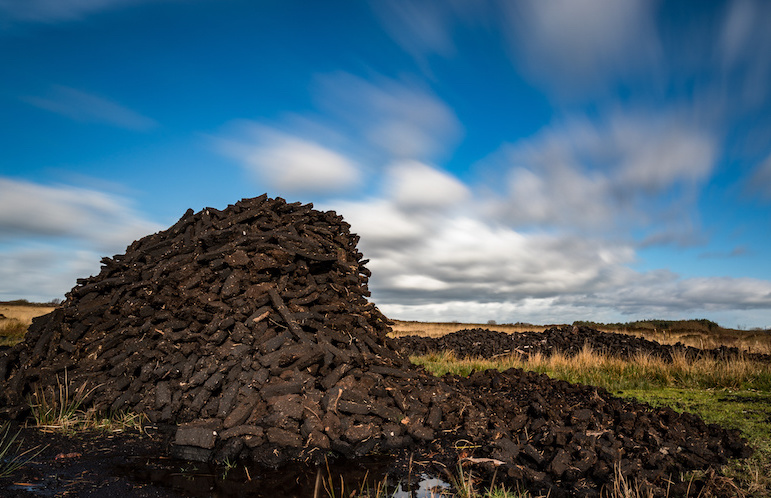 Today is St. Patrick’s Day, and with a name like Turf, we can’t help but report on the controversial state of Irish turf. In Ireland the word “turf” refers not to grass, as it does in the U.S., but rather to a great part of Irish culture: peat. Peat is an accumulation of decayed organic matter, like plant material, formed over thousands of years and found in peatlands, or bogs. For centuries, the people of Ireland made use of their lands’ unique natural feature—the peat bogs that cover much of the country—by cutting rectangular chunks of the peat, drying them, and burning them for fuel.

According to a December 2020 article, “How Ireland is abandoning its dirty fuel,” in BBC Future, “As a country without its own oil, a limited supply of gas and almost no coal, turf has been an important fuel for Ireland, providing the island nation with some energy self-sufficiency. Many families still have an area of bog, often passed down through generations, from which they can harvest enough fuel to see them through the year. It is an important part of Irish culture and national identity…  The unmistakable smell of turf smoke in the air has long been a signal that you’ve left the city behind and arrived in rural Ireland.”

More than just culturally significant, peat is economically significant to households (according to one BBC source: two homes with a family bog can be heated for $830 for the winter; oil could cost between four and six times more) and communities who count on jobs with companies extracting peat as well as power plants burning peat.

Yet today peat is recognized as a carbon inefficient “dirty fuel,” even more so than coal. According to the BBC article, “Intact peatlands are an efficient carbon sink, but damaged peatlands are a major source of greenhouse gas emissions, annually releasing almost 6% of global CO2 emissions.” The article continues, “Globally they store twice as much carbon as all the forests of the world combined.” Peat bogs are also ecologically unique. The peatlands of the Irish Midlands are “raised bogs,” one of the rarest habitats in the world and the most threatened type of bog, with only 0.6% of active bog remaining intact.

As a result, under the EU’s Habitats Directive, 57 sites have been designated as Special Areas of Conservation (SACs) specifically for their raised bog habitat. Mechanical turf cutting has been illegal in these areas since 2011, according to the Irish Wildlife Trust (IWT). Yet, in a statement this past November, the IWF cites a document reporting that turf-cutting took place at 16 SACs in 2020 (including Mouds Bog SAC in Kildare, pictured below). 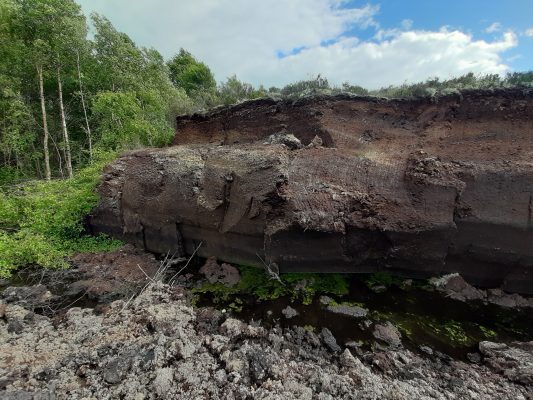 IWT campaigns officer Pádraic Fogarty commented, “The battle to save the bogs has been traumatic for many involved but we at least thought that issues had been resolved with the prohibition on turf-cutting in raised bog SACs and the publication of the National Peatlands Strategy. Now we learn that these have been meaningless exercises and that we’re continuing to lose even these tiny fragments.”

He continues, “It’s bizarre that at a time when EU funding is going to actively block drains on 12 raised bog SACs, and that government spending is being directed toward rewetting worked-out bogs, that elsewhere authorities are turning a blind eye to the use of heavy machinery cutting the bogs away. So far, we’ve been doing a spectacular job of monitoring the disappearance of nature in Ireland.”

The Future Of Bogs

The aforementioned BBC article profiles a bog that has been restored and now supports Scots pine, heather, lichen, and other wildlife—and cites the potential restored bogs could have for education and tourism in biodiversity conservation. Pippa Hackett, a Green Party politician and Irish minister for state for land use and biodiversity, told the BBC, ““I see the bogs of the Midlands as a ‘mother figure’. For generations she warmed our homes, sustained our jobs, fed, clothed and educated us. But now, she is old and needs us to care for her in her retirement. We need to recognise that and still value her. And I believe we can do that.”