News from around the Green industry

John Deere Credit has launched a search to find the most Beautifully Brutal Golf Holes in North America. Superintendents, architects, owners and developers can nominate holes on their courses by submitting photos and descriptions of what makes the holes challenging. Nominations will be collected from five regions in the United States and one in Canada. Entries will be featured on a special contest Web site, www.JohnDeereCredit.com/BrutalGolfHoles, on posters and in national and local media. Judges will select winning holes in each region and choose 18 of the regional winners as the overall winners. Winning holes will be announced quarterly. Photos and descriptions of the holes will be published in a keepsake calendar. The deadline for par 4 holes is May 15, 2008, and the deadline for par 3 holes is July 15, 2008.

Kenworth Truck Co.’s manufacturing facilities in Chillicothe, Ohio, and Renton, Wash., have earned the ISO 14001:2004 certification for effective environmental management systems established to help build Class 8 trucks in an environmentally sustainable manner. To achieve certification, a company must demonstrate and provide objective evidence to a third-party auditor that its system is operating effectively in conformity to the established standard. Kenworth’s audit was conducted by SGS Systems & Services Certification.

BASF Turf & Ornamentals has launched a new online training module to educate golf course superintendents on its Trinity fungicide. The new module at www.betterturf.com explains use sites, key benefits, recommended turfgrasses and diseases controlled. It also features interactive narration by Kyle Miller, senior technical specialist at BASF, and a quiz at the end.

Agrium Advanced Technologies announced the addition of Bryan Gooch as marketing manager for coated products in their Sylacauga, Ala., location. He will provide leadership to the organization and will be responsible for the POLYON and Duration brands. Gooch holds bachelor’s and master’s degrees in turfgrass management from Virginia Tech and a master’s in business administration from the University of North Carolina. Prior to joining Agrium, Gooch worked for Bayer Environmental Science in various sales and marketing management positions.

Exmark has invited the public to meet the people behind its products. A new Web site, www.exmark.com/stories, features the stories of Exmark team members, describing typical workdays, proudest moments, funniest stories and more. Exmark will continue to post new stories throughout 2008.

Exmark and the Toro Giving Program recently awarded a grant to Homestead National Monument of America. Located just west of Beatrice, Neb., Homestead is a unit of the National Park System. The grant, in the amount of $33,890, will be used to create new outdoor exhibits, which will be placed throughout the monument’s 100-acre restored tallgrass prairie and at the Freeman School, a historical schoolhouse.

Manitou North America announced that Kirk Zander has been named director of sales and marketing. Zander has worked for Manitou as Midwest regional sales manager and field sales manager.

Dow AgroSciences has added Marney Dorsey and Justin Stewart to its turf and ornamental sales team.

Dorsey will cover sales in Ohio, eastern Michigan, western Pennsylvania and western West Virginia. She joined Dow in 2007 as a sales trainee. Dorsey attended Pennsylvania State University, where she earned a bachelor’s degree in agricultural sciences and a master’s in agricultural and extension education. Dorsey replaces Kylee Swyers, who has been promoted to the United States Northern Crops marketing communications position.

Stewart will be responsible for sales in Arkansas, Tennessee, Mississippi and Kentucky. He joined Dow after completing graduate school at Purdue University, where he earned a bachelor’s degree in turfgrass science and master’s degrees in business and plant pathology. Stewart has more than 10 years of experience in golf course maintenance.

The Toro Co. announced that the 2008 James R. Watson Scholarship recipients are Sara Camuso and Nicholas McKenna. The program awards scholarships to students who are planning a career in the sports turf industry. Camuso is majoring in turfgrass sciences at Pennsylvania State University. McKenna is a graduate research assistant at Virginia Tech, specializing in crop soils and environmental science/sports turf. Applicants are judged on academic preparation, cumulative grade point average, experience in sports turf management, references, contributions and career objectives.

Jared Knoodle was the winner of the sixth annual Toro Super Bowl Sports Turf Training Program. Knoodle traveled to Phoenix, Ariz., to help the grounds crew prepare the game field and practice facilities for Super Bowl XLII. He is working toward a master’s degree in athletic administration at Michigan State University.

Accu-Length, by OnTrack Sports, has signed a distributorship agreement with Dimple Ltd. to have its clubs sold in New Zealand. Dimple is an importer of golf equipment in New Zealand and Australia.

Accu-Length has partnered with Dancin’ Dogg Golf and Medicus Golf on a teaching program for younger players. The Junior Success Kit gives junior golfers the ability to develop and improve their swings at home.

Shawn Wolf has been named president of Wright Mfg. Bill Wright had held the position since establishing the company in 1981 and will continue on as chairman of the board. Wolf had served as chief operating officer for the past eight years. He came to Wright with over 10 years of executive experience. He has a bachelor’s degree in business administration from Bryan College, a master’s in management from Eastern University and is enrolled in a doctoral program in strategic leadership at Regent University.

Aquascape, Inc. and its distributors are offering a range of water gardening seminars held in locations across the country throughout the year. Topics include basic and advanced pond installations, sales and marketing, and information on the latest industry trends. For more information on the classes, log on to www.aquascapeinc.com/wholesale or call 866-877-6637.

Roger A. Johnson has joined Agri-Fab, Inc. as national sales manager for North American consumer products. He will be responsible for identifying and pursuing strategic growth opportunities. Johnson comes to Agri-Fab from Kimberly Clark Corp., where he held a series of sales and marketing positions. He earned a bachelor’s degree in business administration from Carroll College and a master’s in business administration from Baldwin Wallace College.

Nibco, Inc. unveiled a new look for its home page at www.nibco.com, offering visitors better access to new product information, career opportunities and a What’s New area that will highlight pertinent corporate and product information. The page will make it easier for visitors to locate resources and tools, including the catalog/price sheet area. In addition, Nibco offers a Contractor & Engineer Corner to make it easy to locate submittals, product specifications and the newly expanded 2D/3D library that contains a selection of CAD drawings.

John Muehlbauer has joined Wiedenmann’s North American sales staff. He has performed contract aerification sales/services and operated his own landscape business for many years. Muehlbauer will be covering the Midwest portion of the United States and Canada.

Mike Smith has also joined the Wiedenmann sales team. Smith has worked for several turf houses over the past 30 years. He will be covering the East Coast of North America.

Beard Equipment, based in Mobile, Ala., was named top distributor of the year by John Deere Golf at the 2008 Golf Industry Show. The Beard Equipment team was presented with the Mark Rostvold Award, given annually to the distributor that exemplifies superior salesmanship and industry dedication.

Joe Burke was named business manager, imidacloprid products, for Bayer Environmental Science. He will have marketing responsibility for Merit, Allectus, CoreTect and all other green industry imidacloprid products. Burke has worked for Bayer and its predecessor companies since 2000. Previously, Burke worked for Timeplex Group for nine years. He holds a bachelor’s degree in business administration from Ramapo College of New Jersey and a master’s in business administration from Fairleigh Dickinson University.

MacGregor Golf Co. announced that Michael J. Setola has been named president and CEO. Setola was most recently president of Oxford Industries, where he was responsible for multiple brands and operating groups. Previously, he was chairman and CEO of Salant Corp.

Strata Systems, Inc. announced that its geogrids and other soil reinforcement products have been issued a CE marking certification. CE is a mandatory European marking for certain product groups to indicate conformity with health and safety requirements. The CE marking allows Strata to sell and distribute its products throughout the 28 countries of the European Economic Area.

Tru-Turf, a manufacturer of greens rollers, is the newest On the Course Partner of The Experience at FarmLinks. Tru-Turf’s rollers will be added to FarmLinks’ educational programs.

Blake Garrett has returned to The Experience as manager, having previously served as golf course superintendent. Garrett has more than 11 years’ experience in the golf course industry. He attended Auburn University and received a bachelor’s degree in agronomy and soils/turfgrass management. 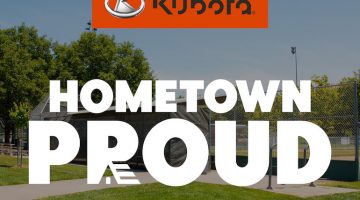