The big news in the landscape industry so far in 2015 is California’s historic drought, now in its fourth year. The drought is changing the face of landscaping in the state, and especially in regards to home lawns.

To date at least 26 water agencies in the state, desperately seeking to reduce urban water use, are offering rebates to property owners to remove turfgrass.

The water agencies are singling out the irrigation of lawns as a water-waster, and are stepping up efforts to reduce their size and numbers in the wake of Gov. Jerry Brown, on April 1, ordering all cities and towns across California to reduce water use by 25 percent.

The amount of lawn grass that is being replaced so far this year with rocks, artificial turf and xeric plants is considerable. That should come as no surprise given the financial incentives that water agencies are offering property owners to get rid of their lawns. It is nothing new either, as some water agencies have had turf-removal programs in place for years. The intensity and scale of the programs are impressive.

For example, several months ago the Metropolitan Water District of Southern California doubled its incentive to replace turf from $1 to $2 per square foot. The Association of California Water Agencies reports that in July almost 2.5 million square feet were being removed in the area served by the MWD alone—the equivalent of 1,665 typical Southern California front yards.

Businesses requested rebates for the removal of an additional 4.7 million square feet of turfgrass.

On Thursday, July 10, the MWD reported that it is no longer taking applications for turf removal, as all of the funds it had budgeted for the program last December (all $350 million) had been allocated. An MWD spokesperson said there are no plans to extend the program.

The California landscape industry is large and vibrant. The California Landscape Contractors Association (CLCA) pegs the size of the industry at $25 billion industry employing about 170,000 people.

California landscapers are innovative and, from reports, many companies are as busy as they can be converting properties to drought-resistant landscapes.

While water agencies are reporting significant water savings because of their recent efforts, only time will tell if their assault on turfgrass lawns was a good idea. One thing for certain, it’s changing the face of landscaping in The Golden State. 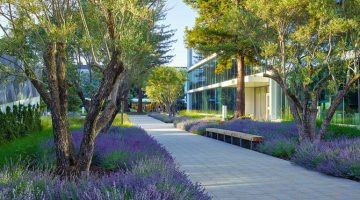