Is This How You Started Your Mowing Business?

I can’t recall how many successful landscape company owners I’ve met who have told me they got into the business as a youngster behind a small consumer push mower. Usually they got their first taste of the industry by mowing neighbors’ lawns.

On a recent hot July morning in my hometown of Port Clinton, Ohio, as I am heading to a small private office in my local library where I often work, I come across Tom Ball and his homemade wooden trailer sporting a small handwritten advertisement for his mowing service. 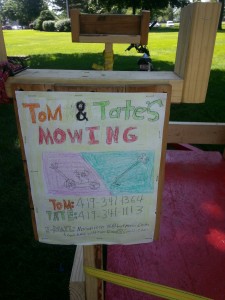 Tom is with a friend on the sunny concrete entrance to the library. Tom seems to be tinkering with the new wheels he has fashioned to the trailer. He tells me that he and his grandfather got the wheels just the day before at a nearby Tractor Supply store.

I give the trailer a good look as I have never seen anything like it before. Tom has ingeniously, using a hitch and rope, attached the trailer to his BMX-type bicycle. The trailer, with wooden supports to accommodate some hand tools or a trimmer, is just large enough to fit a small gas push mower. How much can you pull behind a 20-inch bicycle, after all?

Tom tells me he and his cousin, Mason McDougall, run the small mowing operation. Mason’s nickname is Tate, which makes sense as their mowing business is known as Tom & Tate’s Mowing.

How much do they charge, I ask?

“Whatever we can get,” Tom responds with a shy smile.

“Charge enough to make it worth your time and effort,” I reply, not able to let this opportunity to dispense free advice escape. “Mowing is pretty hard work and you should be rewarded for what you do.” (I figure that’s all the free advice he wants to hear from me, a stranger asking a lot of questions.)

A bit later, perhaps 15 minutes, Tom gives me a call. He says Mason has turned up, and that they have a mowing job, but not until late afternoon or evening. Just as well, I think to myself. It is midday, there are just a few wispy clouds in the sky and the temperature is approaching 90 degrees.

Good for Tom and Mason, I muse as I leave the young entrepreneur and head to the small air-conditioned office in the library.

As I leave them and their homemade trailer, I can’t help but recall how I mowed my neighbors’ quarter-acre lawns ($2 each) in the then-new development of modest, three-bedroom ranch houses in Milan, Ohio, where my family moved from Detroit more than a half-century ago. Was it really that long ago?

Next post The Grass Roots Exhibit Highlights Benefits of Turfgrass 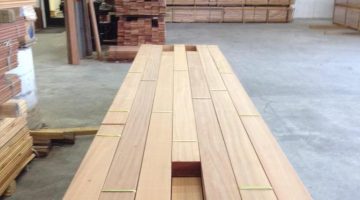